Chandigarh: In an interview with journalist Yadwinder Karfew for ABP Sanjha Punjab minister and Shiromani Akali Dal (Badal) leader Tota Singh, who had faced strong protests during his recent visit to USA and Canada, has claimed that foreign visits of Badal Dal leaders were a massive success. He said that the reports about strong protest against their visit were not correct and this miss-impression was a media creation.

He said that he had held 19 meetings with NRIs and all meetings were very successful. He maintained that there were only few people who protested against Badal Dal leaders. He further said that the protests were a conspiracy of the Congress Party. 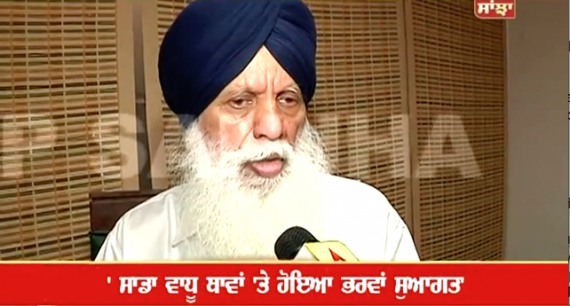 Punjab Minister said that there are few people who were misusing the platform of Facebook to propagate against Punjab government and Shiromani Akali Dal Badal. He said that such a use has even lowered the credibility of Facebook itself.

He blamed media for not verifying the news of protest in New York and said that a news item sent by a journalist, who happens to be their opponent, was covered by entire media section in Punjab and India. On being asked that if he would file a defamation case for wrongful reporting, he said that defamation cases are popular abroad but he do not want to engage with media in a defamation case here in Punjab.

He claimed that his party enjoys strong support amongst NRI and Sikh Diaspora sections.

It may be recalled here that Shiromani Akali Dal (Badal) leaders were first confronted by Sikh diaspora sections in Toronto and after that they faced strong protested in New York, Abbotsford, Sacramento and other placed. In wake of such protests SAD (B) leaders had failed to turn up at various conferences that were said to be organised by their leaders.

Another SAD (B) leader and Punjab minister Sikandar Maluka has even blamed Canadian police for being inefficient and said that SAD (B) rallies were foiled because of Canadian police’ failure to curb the protests.

Notably, Canadian minister Jason Kanney had strongly rebutted Maluka’s statement. ‘Go home and deal with the serious problem of drug crime that is taring up many aspects of Punjabi society, maybe they should deal with god knows.I sat down with Chief Minister Badal Singh on multiple occasions and pleaded to him to have the Punjabi state authorites and officials to work with out counselor to crack down on the industry of the unscrupulous and fraudulent immigration agents who exploit Punjabis wanting to come to Canada.And So often these guys get arrested and then they are on the streets again. So I think there are enough problems to deal in Punjab.’ Jason Kenney had said.