Mumbai: As per the media reports the long friendship of two pro-hindutva heavy weights Shiv Sena and Bhartiya Janata Party (BJP) has come to an end. The Shiv Sena here on Tuesday passed a resolution to go solo in the upcoming Maharashtra assembly polls as well as the Lok Sabha elections scheduled in 2019.

It is said that Shiv Sena leader Sanjay Raut reportedly moved the resolution at the party’s All India executive committee meeting in Mumbai and it was passed unanimously. The party has pledged to win at least 25 seats (out of 48) in the Lok Sabha and 150 seats (out of 288) in state assembly. 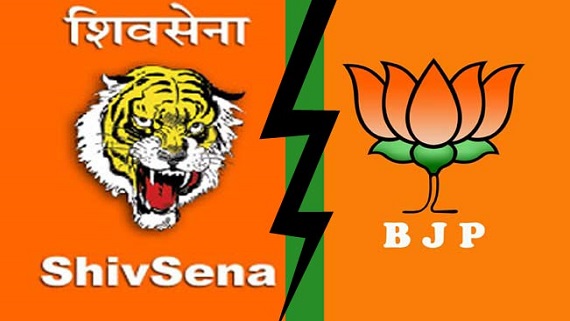 “The BJP allied with the Sena in the name of Hindutva and the Sena kept patience for Hindutva. However, the BJP in the last three years has been demoralising the Sena and using power to do so,” Sanjay Raut reportedly said during the meeting.

Meanwhile, it is said that state chief minister Devendra Fadnavis expressed his skepticism and adopted a ‘wait and watch’ outlook.

“Lets wait, they have been saying many things, as of now we are in alliance in the government and this government will complete its term,” Devendra Fadnavis said in his statement to a news agency.

Time and again the Shiv Sena leaders have shown their restlessness and resentment with their alliance partner and ruling BJP. One instance of that was during the last year’s United Nations (UN) lead human rights submit in Geneva (Switzerland) where a diplomat representing India had retirated that India was a “Secular” country and belongs to each and every religious minority. This statement had infuriated Shiv Sena back in India at that time and had claimed that the BJP has betrayed the cause of ‘Hindu-rastra’.

Apparently, under the guise of being vocal in opposing some of Indian Prime Minister Narendra Modi’s policies the ‘pro-hindutva’ is expressing its anguish over non implementation of hindutva agenda across India, that threatens the very existence of minorities in India.

Cracks in the BJP-Sena alliance became apparent when the latter decided to contest the 2017 Brihanmumbai Municipal Corporation (BMC) polls on its own strength. What followed was a bitter-fought campaign with allegations of corruption and incompetence flying back and forth. The Sena had emerged as the single largest party, bagging 84 seats in the 227-strong civic body as against the BJP’s tally of 82, reads a quote from a report published in Times of India (ToI).