Ludhiana: As per the media reports the Ludhiana police has here on Wednesday nabbed Shiv Sena (Hind) leader Rohit Sahni and his four aides for faking threats to life and trying to create a wedge between Hindus and Sikhs to seek more security. 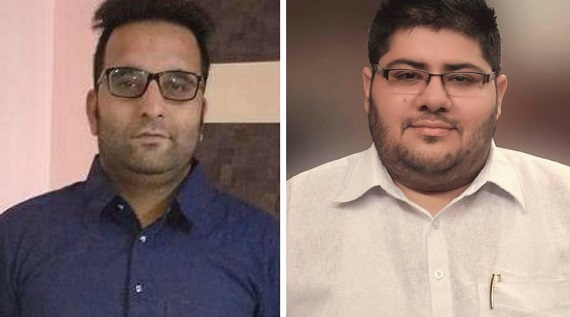 Rohit Sahni and Sanchit Malhotra, among the five men arrested who, according to the police, were hatching conspiracy to create a rift between Hindus and Sikhs using social networking sites.(HT Photo)

This is not the first time that the members of the ‘pro-hindutva’ outfit has managed to fake attacks on themselves in order to get security cover from the state police. Since the last two years Shiv Sena’s Amit Arora and RD Puri were arrested for “stage- managing” attacks, the third case was that of Deepak Kambhoj of Jalandhar who staged an attack on himself in order to enhance his security cover.

Police Commissioner RN Dhoke, who was accompanied by  ADCP RS Brar, ACP Sachin Gupta and SHO Amandeep Brar, reportedly said that Malhotra lodged a complaint on August 22, claiming  he and Rohit Sahni, general secretary of the outfit, had received threats from two motorcycle-borne Sikh activists, who had thrown pamphlets on his car bonnet.

“On September 27, Malhotra again approached the police, claiming he had received a message on WhatsApp, threatening that he and Sahni would be killed within 10 days. “I marked an inquiry to ADCP Brar who discovered that the whole story was concocted,” Commissioner RN Dhoke adds.

“It was Goldy and his friend Prem who, riding a motorcycle (PB 10 FW 9140) and wearing dastars (turbans), had thrown pamphlets on Malhotra’s car and then sent threat mails, as instructed by the latter. Goldy, who is an illiterate, asked his friend Gurpreet to type the messages on the cellphone purchased from Rizwan’s shop,” reads a quote from a report published in an English vernacular.

Amandeep Singh Brar, the SHO of Salem Tabri, said. As a reward, Sahni appointed Goldy as president of Ludhiana East, he adds.

Interestingly, the members of the pro-hindutva outfit are increasing found to be caught in exploiting the Sikh cause of self-determination for their treacherous vested interest. The major reason behind these acts is that these Hindutva elements finds it easy to have or increase the existing political space for them in the mainstream politics of both state as well as of the sub-continent. This is because appeasing the majority on the expense of the rights of the intimidated minorities is the model of politics of the day in India.

The accused Sena leader had recently told the CP that he had received threats from gangster Jaggu Bhagwanpuria, who is lodged in the Amritsar jail. Sahni, who was earlier with Sri Hindu Takht led by Panchanand Giri of Patiala, parted ways to join the Shiv Sena (Hind), notes The Tribune (TT).