According to Greater Kashmir (GK), Pandit Rajesh Kasari at several times repeated the term “Martyr” for Burhan Wani and for other civilians killed during 2016 summer unrest, saying “government must pay compensation of Rs 50 lakhs to each victim family.” 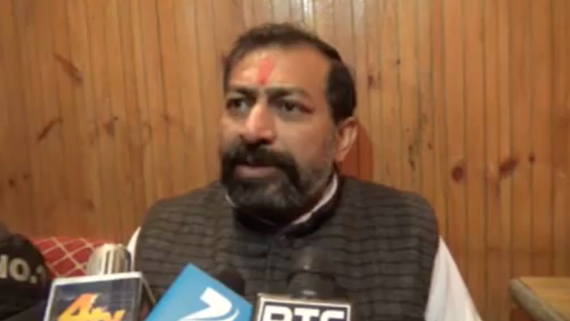 “On ground, the reality is different. Khalid Muzafar Wani (Brother of slain militant commander Burhan Wani) is a martyr. His brother Burhan Wani is also a martyr. I will say that all those killed during 2016 unrest are martyrs,” GK quotes Pandit Rajesh Kesari.

He said that a case should be registered against state government “for killing innocent people in Kashmir.”

He said that “wrong policies pursued by the state and central governments are the reasons for anti-India sentiments in Kashmir.”

“After his martyrdom of Burhan Wani, innocent people were maimed, blinded and killed. What government got by killing innocent people? Now the Chief Minister of the State is shedding crocodile tears. The fact is that government has let loose a reign of terror here in Kashmir,” he said.

He said that state government must be made accountable for its “all wrongs and killings.” “The government instead of improving situation in Kashmir has been adding fuel to worsen the situation by adopting wrong policies,” he said.