Chandigarh: Moga police on Tuesday registered a case against Shiv Sena district president Vikas Kaura on the charges of assaulting and tearing off the uniform of his security guard, constable Baljit Singh posted at the residence of the accuse. The case has been registered under sections 353 (assault or criminal force to deter public servant from discharging duty) and 186 IPC (obstructing public servant in discharge of public functions). No arrest has been made so far. 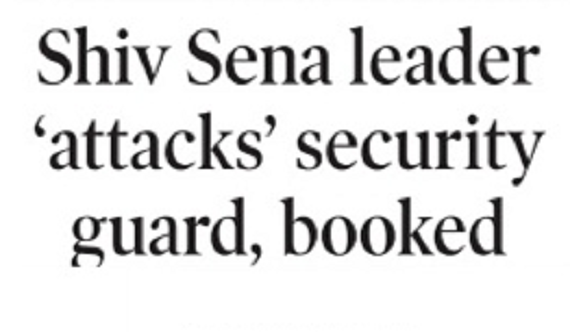 As per the media reports constable Baljit Singh posted in the 3 Reserve Battalion was deployed for the security of Kaura from the last 6 months in his complaint he claimed that Kaura used to ask him to do domestic jobs (Household Chores) and on Tuesday too he asked him to run an errand. The constable further said that when he refused, Kaura toppled his turban and tore his uniform.

Interacting with the media Vikas Kaura  while repudiating the charges allegedly said “The constable is an alcoholic. I had got him transferred to other place but he was not ready to go and quarreled with me.“ Moga city police station SHO Rajinderpal Singh said they had registered a case. “Further probe is on.“ media reports said.

Furthermore it is pertinent to note that the members of the Shiv Sena cartel has been involve in self inflicting or faking attacks on themselves so as to get security cover from the state government. One such incident was of Deepak Kambhoj from Jalandhar in which he orchestrated a gun attack on himself on February 16, 2016 in order to get more security form the police.Subsequently  in yet another incident a Shiv Sena leader from Ludhiana Amit Arora faked the attack and got himself injured.