Shoe Hurled at Bikram Majithia in his home Constituency Majitha

Majitha: A shoe was reportedly hurled at former Punjab minister and Shiromani Akali Dal (Badal) MLA Bikram Singh Majithia during a police public contact program on Saturday (May 20). Media reports say that the shoe was hurled on Bikram Majithia after he paid a “surprise” visit to a public contact programme of Additional General of Police (ADGP), Law and Order, Rohit Chaudhary, in Majitha Saturday.

ADGP Chaudhary’s gesture to welcome the SAD leader to the programme did not go well with the public, majority of whom were Congressmen. 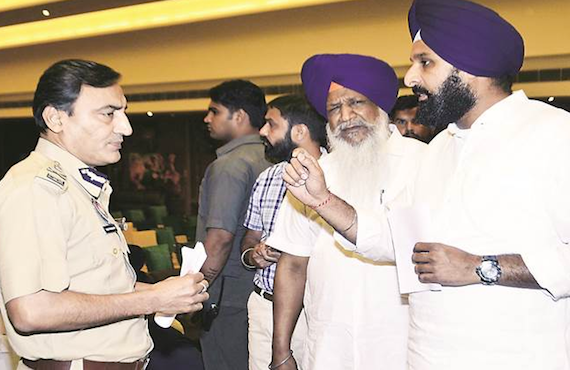 “Estranged Congress workers also tried to stop the motorcade of the former minister and one shoe was thrown at his car while he was leaving the venue. ADGP Chaudhary was holding a programme at a marriage palace for the people Majithia constituency. Most visitors were Congressmen. They had come with complaints of alleged fake cases filed against them during the 10-year-long SAD-BJP rule in the state. Most of these complaints were against Bikram Singh Majithia and his men”, notes Indian Express (IE).

“Congress activists allegedly lost their temper after seeing Bikram inside the campus. They started raising slogans against him and forced him to leave the venue. While Bikram’s cavalcade was leaving, a youth hurled his shoe at the SAD (Badal) leader”, notes Daily News & Analysis (DNA).

Later, Bikram alleged that ADGP’s show was not for public but only for Congressmen, notes IE.