Sidhu Not Out! [by Gurtej Singh (IAS)]

It is not everyday that a person’s friend is sworn in as the prime minister of a neighbouring country. Navjot Singh Sidhu has gone to attend the ceremony. It is an occasion that should have been seen as a welcome opportunity to promote friendly relations between India and Pakistan. The precedent of our prime minister dropping in uninvited to greet Nawaj Sharif on his birthday, was seen as a goodwill gesture, that it was, though the visit was totally against existing protocol. We are all human beings before we are citizens. Even as citizens we are not slaves. Artificial lines on maps cannot hold us from responding to human warmth. If we are citizens, we are, first of all citizens of the human fraternity which knows no boundaries. Guru Nanak talks of the entire earth being our mother whose common children we all are. Friendship in itself is a noble trait which cannot be given up for anything in the world. Our young warriors of old used to travel a hundred miles to die with a friend. Remember the hero Bhai Mahtab Singh who walked from Bikaner to Lahore to share the fate of Bhai Taru Singh!

How can we forget that it is Punjab on the other side to which we go when we cross over the border. We have a shared history of many millennia with its inhabitants. Some of our holiest shrines are in that Punjab. Those who were eulogising Punjabiat day in and day out, must pause and consider whether they are only half Punjabis? Their other half appears to have become the property of the devil. 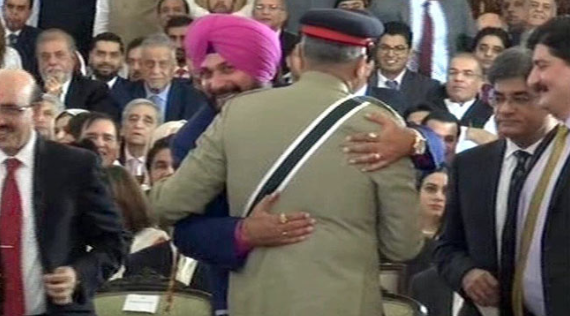 Sidhu is being told that he should have remained here to mourn the death of a former prime minister. In the Punjab we do not mourn those who have lived well and have died a natural death at a ripe old age.

“sant mooai kiya royeeai jo pane greh jahain” Ahmed Shah Abdali was told that the Sikhs mock death and tear to pieces the pall of grief it spreads over others. After all we are a part of Guru Akalpurakh who never dies. No blame attaches to Sidhu on that count.

Sidhu embraced Bajwa! How else do you greet a neighbour who brings the glorious tidings that the Guru’s last resting place is to be openly accessible to these Punjabis? How else do you greet a person who comes with the tantalising gift of peace in both hands? When there is a war we are destroyed on both sides. It is my Nankana, my Kartarpur that suffers on that side: It is their Roza Sharif, their Samana which faces harm on this side.

When Bajwa comes riding a tank our Harbaksh Singh will meet him half way at Khemkaran. You will not embrace him off the battlefield; you will not engage him in the field. You will brag about lynching his pale shadow a thousand years later. When the battle ends, our enmity ends. We sat in the Guru’s langar to share meals with Afghans prisoners of war captured from the forces of the fleeing Tom Cat Abdali. Off the field of battle we are all part of one human brotherhood: the sons and daughters of One Akalpurakh, the Father and Mother of us all. For us there are no aliens. Our Guru has a large heart and a lap extending to infinity.
Since this piece is nearing the end, here is the disclaimer: I personally do not know Sidhu and he has never heard of me. I do not like many of his ways and am no cricket fan. You hate him for what he has come to symbolise during this trip. I embrace him for the tidings of Kartarpur, for the news of peace, for the professions of friendship with the other Punjab and for the turban he wears on his head because I suspect, on occasions such as this, he wears it in his heart too. As for the rest, Sidhu is all yours. I willingly donate him to you.

* This write-up originally published by S. Gurtej Singh on his Facebook wall.