Amritsar: Even after strict instructions to the administration to impose a strict ban on sale of tobacco products inside the walled city which hosts many Sikh shrines including the Darbar Sahib to uphold its sanctity, the illicit practice continues smoothly a few yards away from the shrine.

The fact came to light when members of a Sikh organisation named Guru Granth Sahib Satkar Committee found a shopkeeper selling tobacco products including cigarettes, khenni and gutkha near the Jallainwala Bagh.

Interestingly, this shopkeeper runs a small outlet of cold drinks and other eatables, but has kept the tobacco products below the counter to escape the administration’s eye in case of an inspection. Smelling this practice on large scale, the Sikh activists led by Balbir Singh Mucchal checked some other vends and shops and found eight such outlets violating norms, from Jallianwala Bagh to Fountain Chowk, a no-vehicle zone. 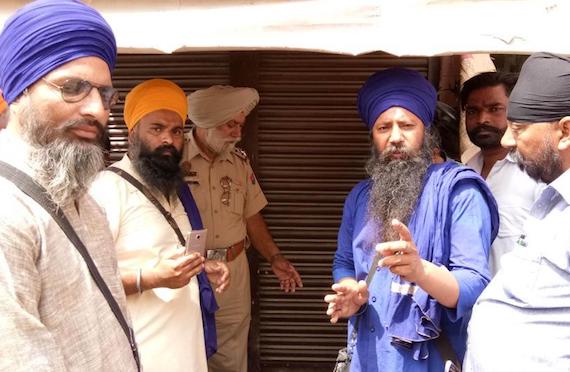 One shopkeeper reportedly stored drug substance for ‘Hukka’ as well.

The organisation members complained at the Kotwali Police Station following which, a police team visited the said outlets. When the cops also found the objectionable products inside the shops, they called officials of the health department. “Total eight shopkeepers and vendors have been challaned for the act,” said inspector Gurbinder Singh, station house officer, while speaking to HT on Sunday.

Notably, some shopkeepers also shut down their shops when they saw the Sikh activists and cops taking action against others.

Another Sikh activist Papalpreet Singh said, “Not just the administration, but Shiromani Gurdwara Parbandhak Committee (SGPC) is also in deep slumber, as it never checks what is happening around the shrine.”

When contacted, SGPC chief secretary Harcharan Singh said he had no idea of this act as he is out of station.

Harbhajan Singh Manawa, secretary of Dharam Parchar of the apex gurdwara body said drugs and liquor are banned not only near Darbar Sahib, but on the entire walled city. He said they can only lodge a complaint to the administration if such an act comes to their notice.

It may be recalled that former deputy chief minister Sukhbir Singh Badal had once stated, in reaction to Delhi CM Arvind Kejriwal’s announcement that their government will declare Amritsar a ‘holy city’, that such substances are banned in walled city since three decades.