New York: Taking away someone’s dignity and self-respect is the most despicable thing anyone can do to another human being. Travelers are customers and the airlines are providing a service to millions of paying customers. The airport is one place where Sikh Americans pay to get humiliated. Yes, many Sikhs stopped flying after 9/11 because of this overt turban profiling which has only got worse today. Sikh Americans are trying to adjust to the new norm of being bullied more than others thanks TSA. When a Sikh American gets religiously/racially profiled in front of all those other passengers, few may sympathize, but many stare and shake their heads, further exacerbating negative perceptions of the turbaned bad guy.

A high school senior Karanveer Singh is a gregarious extrovert who is very sociable young man always stepping out of comfort zone to make friends with complete strangers anywhere. He had gone to talk about his most recently published book; Bullying of Sikh American Children – Through the Eyes of a Sikh American High School Student on the invitation by the Shaheed Baba Deep Singh Gurdwara (house of prayer) as an inspirational speaker to address all the kids participating in the annual Sikh Youth Symposium – a public speaking competition being held in Bakersfield, CA on Saturday April 16, 2016. On Sunday afternoon Karanveer spoke to large gathering of Sikh Americans; the general public in presence of city officials like Assemblywoman Shannon Grove, Assemblyman Rudy Salas and the city Mayor Harvey Hall at the Vaisakhi – Sikh Peace Parade on the topic of ‘Bullying of Sikh American Children’ which was well received. Several city officials got the books. It is unfortunate that an hour later he had to face racial discrimination while trying to catch the American Airlines flight 2955 back to Philadelphia from Meadows Field Airport, Bakersfield, CA at 4:15 pm on Sunday April 17, 2016. 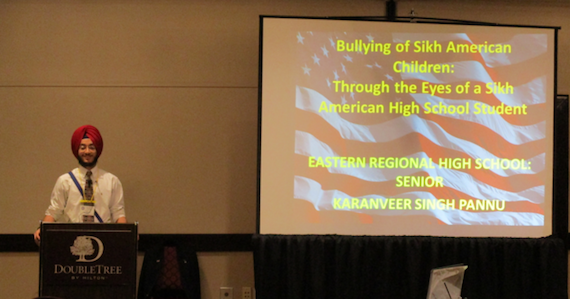 Karanveer Singh presenting at the National Conference on Bullying and Child Victimization in Orlando, FL

He left home carrying brochures/tri-folds about his book covering bullying so that he could educate anyone he ran into while travelling, including the TSA. Little did he know what was in store for him at the Meadows Field airport? There is substantial population of highly visible Sikh Americans, from farmers to physicians living in and around Bakersfield. Yet, while going through TSA’s security at approximately 3:30 pm (PST) Karanveer was profiled. First he stepped through the metal detector, then he was asked to do a self-pat down of his turban and finally did a chemical swab test for explosive material done for all turban-wearing Sikhs. Apparently the swab test alarm went off so he was hauled into the secondary screening room. This is when Agent Hernandez was called to do a more through pat down. Karanveer was taken into a room given the full body search and then told that he would be required to remove his turban, which for Sikhs is equivalent to a strip search. He refused at first but when they threatened him by saying that he could not fly, so Karanveer agreed provided they gave him a mirror to retie his turban. Before he removed his turban Agent Hernandez asked the dreaded asinine question, “Is there anything we need to be aware of before you remove your turban”? He politely answered that there is a lot of long hair and something called the brain underneath. The agent put his turban (barely couple of ounces of soft cotton material) through a scanner /x-ray machine. It was ridiculous that agent Hernandez went further, to actually feel through Karanveer’s hair. Once satisfied that they had usurped all his dignity they told him everything was good to go! Under the gun of possibly missing his flight, being utterly humiliated, shaken, distraught he tied his turban and eventually caught his flight. 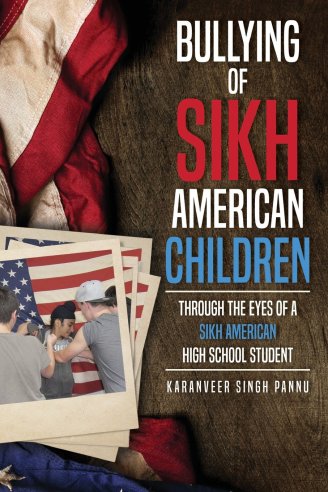 No common sense was used in this case. If the machine went off it would take barely a few extra seconds to do another swab test to make sure there was no mistake by the agent(s). The deeply invasive secondary screening in this case unmistakably showed that there was no issue. If the machine or the operator was in error, then at a minimum the TSA agent should have apologized for their mistake, which they did not. What failed here is the TSA agent’s lack of training on the use of practical procedures.

Here is a high school teenager an Eagle Scout, a very proud American who has spent over a year writing a book on the bullying experienced by Sikh American school children and the irony is that he gets bullied by the TSA on a trip to California which was to talk about bullying. Degrading a young impressionable person because he/she does not fit the stereotypical European American version of being American is most demeaning. Homeland Security and TSA have the unenviable task of picking the potential suspects, however the current criteria of profile analysis clearly falls short as it often violates the dignity of Sikh Americans and others who do not fit the European American stereotype.

By bulldozing over a hardworking, distinguished and highly visible minority like the Sikh Americans our government is alienating a very patriotic citizenry for no reason but overzealous security agents who may be biased and profiling a disproportionate number of a particular group of travelers who all happen to be Sikh Americans. If even children like Karanveer are being bullied by the TSA, is there any chance of dignified behavior by others who maybe ignorant. Many passengers and their children who are (im)patiently waiting to get through airport security will and can assume that it is okay to bully anyone with a turban, since the turbaned Sikh gets the secondary screening till they are stripped of their dignity and not the Catholic nuns with the ‘habit’ who rarely gets even a cursory look.

Pogonophobia and Turbanphobia caused by Islamophobia among the ignorant is seriously affecting the Sikh American community.

Every sensitive black parent has to have a talk with their teenage son about being racially profiled by the police authorities and how to deal with it. It is a very emotionally charged conversation which brings the harsh realities of the American system to light. Sikh American parents have similar conversations with their children, particularly sons and some daughters about being profiled while turbaned.

On one hand as Americans we tout ourselves as the torch bearers for the freedom to practice any religion, yet paradoxically that freedom seems to be hijacked and curtailed by some super patriotic chest thumping European Americans, mostly Christian whose preconceived notions of religious propriety must be adhered to, especially when it comes to religious garb. This bullying of the perceived ‘other’ must stop immediately. Our government must rise above the fray of human weaknesses and in this instance take a quick but a very important lesson from our neighbor in the north – Canada. It is an urgent necessity and the responsibility of the government to educate the TSA agents in religious and cultural sensitivity about all faith communities.

Today it is imperative that we preserve security but concurrently not forget that respecting the religious sensibilities of all faith communities be paramount otherwise we are reneging on our duty as responsible citizens to uphold the first amendment which our founding fathers valiantly stood for against all odds! Let us not be called hypocrites by the rest of the world.