New Delhi: Cutting across party lines various organisations of Punjab and Delhi held a joint demonstration at Jantar Mantar (Delhi) seeking debate in Indian Parliament on the issue of Sikh Political Prisoner confined in various jails across Indian subcontinent despite having completed their minimum mandatory sentences.

The demonstration was called by Bandi Singhs Rihai Sangharsh Committee that was formed to support Bapu Surat Singh’s struggle for Sikh political prisoners. 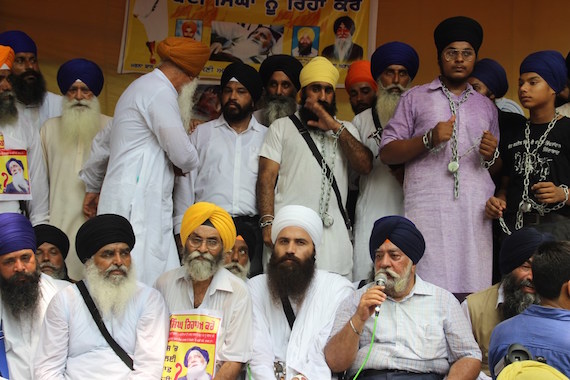 A view of protest demonstration at Jantar Mantar

As per information Delhi unit of Shiromani Akali Dal Badal and SAD (Badal) controlled Delhi Sikh Gurdwara Management Committee (DSGMC) did not participate in this demonstration.

Sikh Sangat led by leaders and representatives of various organisations took out a foot-march from Gurdwara Rakab Ganj Sahib to Jantar Mantar before holding the demonstration there.

While addressing the gathering, speakers criticised the Central government of India and state government of Punjab for their failure to address the issue of Sikh political prisoners.

During the demonstration a letter written by Bhai Jagtar Singh Hawara who is currently logged that Tihar Jail in Delhi was read for the Sikh sangat. Hawara appraised Bapu Surat Singh’s struggle and called upon the Sikh Sangat to unite on a common platform for the success of this struggle.

Aam Aadmi Party MP from Patiala Dr. Dharamvira Gandhi also took part in this demonstration. He said that he had met Bapu Surat Singh who had informed him that his struggle for all prisoners, not only Sikh prisoners, who have completed their jail terms. He said that this was a common and humanitarian cause.