Moga, Punjab: All India Sikh Students Federation (AISSF) supported by Dal Khalsa and Sikh Youth of Punjab (SYP) staged a protest march to slam the Indian political as well as judicial system for utterly failing to punish the perpetrators of the Nov 1984 carnage. The organizations made a fervent appeal to World Powers and the UN to break their studied silence and intervene for the sake of justice.

In a spirited protest, the activists of Sikh organizations took to streets to register their anger and express their pain. They were carrying placards and banners to convey their message. One of the banners stated: India state wants us to forget 1984, we will continue to remember, those who played Tandav with Impunity. We te determined to drive this message to our progeny..’Never Forget 1984′.

Party head Harpal Singh Cheema said 32 years ago on November 1 and 2, the people, politicians, police, paramilitary, the executive all conspired to loot, maim, kill Sikhs and desecrate Gurdwaras and break the backbone of the Sikhs by hurling abuse, dishonouring women and justifying all this as a logical fall out of Hindu anger. 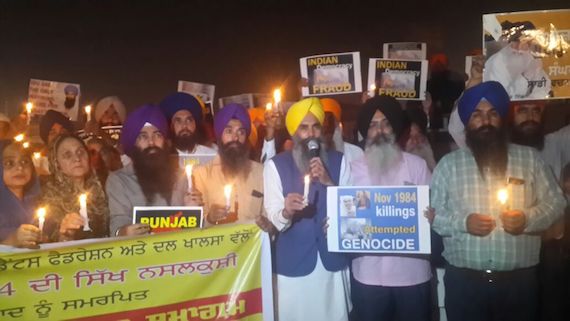 He said barring few honourable exceptions to which the Sikhs will always remain indebted, the whole of India -people and politics and the Indian polity joined hands and nit only witnessed but tolerated and in a most uncivilized behavior ‘enjoyed’ the killings of the Sikhs. No section of this country can be absolved of being silent conspirators to the mass murder of the Sikhs.

The spectacle of the slaughtering of Sikhs, undermining and denigrating the Sikhs was rewarded by the majority people of India by delivering an overwhelmingly majority to the Congress under Rajiv Gandhi in the elections held shortly after the pogrom.

AISSF acting head Karnail Singh Peermohamad alleged that the killings were engineered and conspired by Rajiv Gandhi, Narsimha Rao, then Lt. Governor of Delhi and executed by Kamal Nath, Jagdish Tytler, Arjan Das, Sajjan Kumar and scores of other Congressmen and their henchmen and lumpen elements under their patronage and tutelage. He said the administration and bureaucracy helped the rulers to play Tandav with Sikhs otherwise without their support it wasn’t possible for hooligans to carry out killings of thousands of Sikhs on their own. He said they would submit the memo to UN office in Delhi seeking world body’s urgent intervention.

Dal Khalsa spokesperson Kanwar Pal Singh said with the elections drawing nearer the AAP and the rulers in Delhi and Chandigarh were making noises about victims and denial of justice but ironically they only talk about compensation and not holding anyone guilty. He rue that Sikh lives were being measured in monetary terms year after year.

Throwing perpetrators behind bars followed by resolution of Sikh conflict will be the real justice, said he and added that nothing less than that will soothe the hurt feelings and psyche of the community. SYP head Paramjit Singh said the international community and the United Nations have maintained silence which was disturbingly irking the Sikhs worldwide. Bibi Jagdish Kaur who lost his sons in the carnage was categorical that Indian justice system has failed the Sikhs.