Amritsar Sahib: While terming the India’s republic day as betrayal day for Sikhs, the Dal Khalsa along with its alliance partner Panch Pardhani has decided to organize public rally at Amritsar on Jan 25 to protest against “Injustices and Intolerance”. 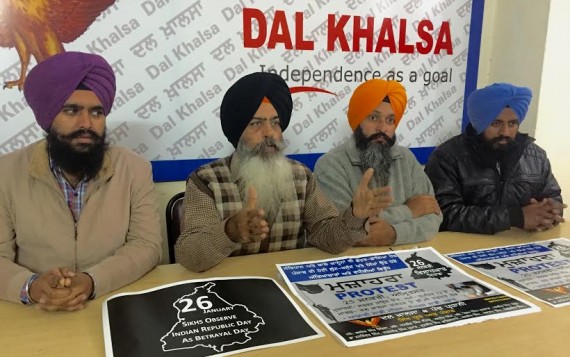 This announcement was made at a meeting of party senior leaders held to make assessment of Sikh position in India. The meet observed that with the adoption of present Indian Constitution,  Sikhs lost their distinct identity and since then they had been struggling to get the Constitutional wrongs “corrected”.

Slamming the present dispensation, party spokesperson Kanwar Pal Singh felt that there was no let up in state’s indifferent and repressive approach towards Sikh aspirations rather it had become more intolerant towards minorities.

Informing the media, he said on the eve of India’s republic day, their party workers would organize protest demonstration at Circuit House Chownk and would march from there up till office of the Deputy Commissioner. He, however, clarified that there would be no disruption of traffic.

He said under the shadow of tricolour and constitution the executive has not only deprived the Sikhs from their national identity but also ruined their national honour and crushed their aspirations and that too under the false notion of protecting country’s integrity.

Explaining as to why their group was giving the call for boycott of Jan 26 celebrations, he said the distinct identity of Sikhs was being subsumed under Article 25 (b) (2), Hindu personal laws were being imposed on Sikhs, Punjab river waters were being looted by subverting the Constitution, denial of justice to those Sikhs who fell into the bullets of security forces and police working with impunity and for unequal laws and rules for Sikh detainees.

He was quick to add that enough blood has been spilled on the streets of Punjab while pursuing the struggling to get the rights and justice. Hence, all these issues were now of secondary importance. The foremost being the restoration of national honour and for that freedom from Indian yoke was essential.

He said it’s ironic that more than 100 times Indian Constitution has been amended but not once to give recognition to separate entity to Sikhs as a distinct religion and quam.