London (Press Release): Parliamentary Under Secretary of State and Minister for Faith Lord Bourne of Aberystwyth attended Sikh Council UK offices in Leamington Spa with senior officials from the Ministry of Housing, Communities and Local Government on August 6. It was the first stop of his faith tour in the midlands as he met with Sikh Council UK Office Bearers, Executive Committee members and Board of Jathedars from across the country to learn more about the Council’s ongoing work and to discuss current issues. 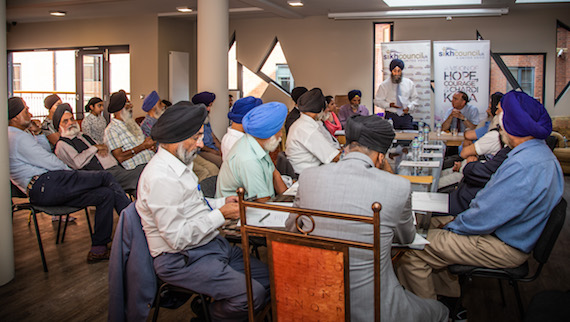 The issues raised in briefing and discussion during the visit included the National Sikh War Memorial, Census, Equalities and Human Rights Commission guidance on Sikh articles of faith, visas for religious workers, caste legislation, 1984 disclosures, Afghanistan Sikhs, hate crimes, the 550th Guru Nanak Gurpurab celebrations and Sikh history and awareness month. Lord Bourne re-affirmed his commitment to working closely with Sikh Council UK on these matters and to take matters forward with the relevant departments. He updated delegates on the shortlisting of a sight in central London for the Sikh War memorial and reaffirmed the Government’s commitment to a substantive financial contribution to the project. He confirmed the Office of National Statistics was yet to make a decision on the question of including Sikhs as an ethnic category in the next census and he welcomed the Council’s engagement on the issue. The visit was followed by attendance at the Gurdwara Sahib Leamington where Lord Bourne met with members of the local community.

Secretary General of Sikh Council UK Jagtar Singh said “We were delighted to host this ministerial visit to our Leamington offices and it provided a useful opportunity for Lord Bourne and his officials to meet with colleagues from the Council’s different structures including the officers, executive committee members and the Board of Jathedars and to gain a better understanding of our existing work. The visit was of mutual benefit and we are pleased with Lord Bourne’s commitment to working closely with Sikh Council UK to address issues facing the Sikh community.