Amritsar: Observing the 34th genocidal day of Nov 1984 killings, the Dal Khalsa will hold a ‘Mashaal (Torch) March’ at Amritsar on Nov 3.

The march will start from Bhandari bridge and culminate at Darbar Sahib where candlelight vigil will be observed in the evening outside the gurdwara precincts.

Holding pictures and placards, the members of the organization will sit for two hours outside Darbar Sahib premises in memory of those who were killed by frenzied mobs orchestrated by then Prime Minister of India Rajiv Gandhi and assisted by state administration. The members will lit candles in memory of 3723 ( as per official version of government) Sikhs killed during Nov 1984 carnage. 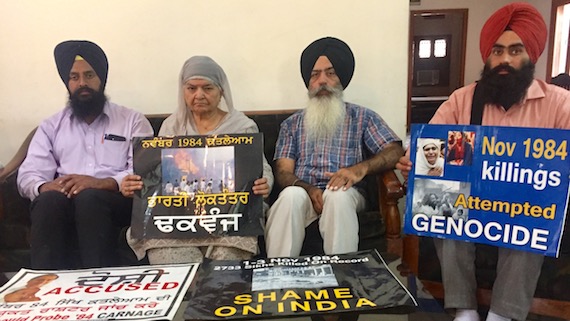 “We urge the Sikhs and God-fearing people across the spectrum to raise their voice against the 34-year impunity to the Indian leaders who allegedly orchestrated 1984 Sikh genocide by participating in commemorating functions, said Paramjit Singh Tanda, Ranbir Singh and KANWAR Pal Singh, office bearers of the party.

Leaders of the Dal Khalsa also met Bibi Jagdish Kaur, prime witness in Sajjan Kumar case, at her residence and invited her for the occasion.

They added, “Justice for 1984 victims does not mean votes for some political leaders like Badals who use this issue during elections but convictions of those responsible for the mass killings.”

Dal Khalsa leaders reminded the SGPC of its resolutions passed last year on Nov 6 in the executive meet held at Patiala for installing paintings and pictures depicting the Nov 1984 genocide in the Sikh Central Museum. “One year has completed and the SGPC has not moved an inch to implement its resolutions”.

The organization reiterated that the pictures and paintings depicting atrocities on the Sikhs sponsored and conspired by then Indian political leadership and executed by frenzied mobs should be made part of the Sikh Central Museum, lest the coming generations forget the tragic event.

They said the Sikh museum has paintings and pictures depicting atrocities perpetrated by Mughal emperors and British rulers of the last century. On the same pattern, we request SGPC to put up paintings and pictures showing barbarism of Indian Hindu leaders of present times. “All these pictures and paintings showing Sikh pain should become part of the museum”, said they”.