Amritsar, Punjab: To commemorate organization’s 37th foundation day, the Dal Khalsa is holding a Conference on August 13 at Jalandhar on the subject of Azaadi-the only way.

The decision to this effect was passed at a meeting of working committee here today. Party spokesperson Kanwar Pal Singh after presiding over the meeting informed the media about the proposed conference. He said Muslims got Pakistan on August 14th and Hindus got Hindustan on 15th while Sikhs missed the bus. He said since then, Sikhs have been longing for their own self-rule. 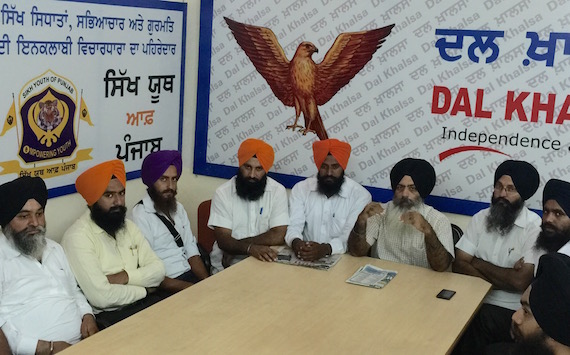 Reiterating their commitment to the cause of Sikh independence, the organization has decided to observe August 13 as “Azaadi Sankalp Divas (Sikh Determination Day for freedom). He asserted that their persistent struggle for the right to self-determination through democratic and political means would reach at its logical conclusion.

He said during the conference, speakers from like-minded groups would touch every aspect of the title the Azaadi-the only way.

The meeting took strong note of “irresponsible” utterances of Congress leaders including Partap SIngh Bajwa and MP Raveent Singh Bittu for raising the bogey of revival of armed struggle in Punjab. The drama played by Ravneet Bittu outside DMC hospital where Bapu Surat Singh Khalsa was forcible detained, was literally childish that reflects his immaturity and stupidity. It was observed that systematic maligning campaign was being unleashed against Sikh hardliners only to show them in bad light.

The activists lambasted section of (irresponsible) media and certain politicians (at Centre and state level) for falsely attributing the attack to the revival of armed struggle for Khalistan. We are at pains to watch how politicians and pen pushers were using their so-called analytical wisdom and expertise to malign and damage the image of Sikhs in the eyes of West and international community by clubbing Sikh freedom movement with Jihadi element’s operating trans-borders, observes Dal Khalsa meet.

As expected in the wake of attack the rhetoric had replaced reasoning and the atmosphere had been created in the whole country to lash out against genuine struggle’s of minority people, said the release.