Melbourne: As per the reports emanating from the local media a Sikh  boy from Western Suburban Melbourne has been denied  admission  because he was wearing a Patka/Dastar. The school maintained that wearing a turban was in contradiction with the uniform policy of the school.

The parents of the 5 year old boy have filed a complaint with Victorian Equal Opportunity and Human Rights Commission (VEOHRC)  against the discriminatory policy of  Melbourne’s Melton Christian College (MCC) the school which denied the admission to the boy and refusing to include any additional items amid the existing permitted uniform protocol. 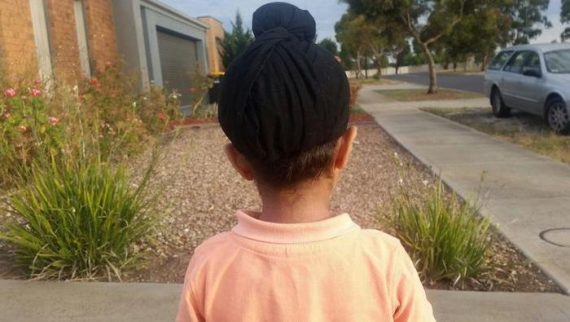 Photo Used for Representation Only.

Sagardeep Singh Arora father of the victim child in a statement to local news outlet said that it was unfortunate that his son was forced to abandon his religious practices and identity to get the education in Melbourne’s Melton Christian College (MCC).

He further added that while a common uniform is no doubt quit important to promote school identity, students should also be able to wear their significant religious symbols and articles of faith. The father also said that even while there were discussions on the importance of Kesh (hairs) and dastar in Sikhi and acceptance of dastar as uniform by different institutes like army, police and schools in the country, still the college failed to review uniform policy.

Furthermore Sagardeep Singh has asked the local Sikh community for their support & co-operation, and has also vowed that he will fight this battle for equality and treating Sikh identity at par in this multicultural society.

The Provincial Human Rights  Commission will be hearing the issue on 16th April 2017.