Sikh Businessman From California Is Latest Victim of The Hate Crime

California: As per the media reports emanating from the local media a Sikh restaurant owner from Woodland, California, has become the target of abuse in the latest instance of alleged hate crime when unidentified vandals wrote “terrorist” and “N” word on the front wall of his Quiznos fast-food store this week.

The media reports said that C.J. Singh, the owner, found those words written on the wall when he came to work on Jan. 25. He said someone also tried to set the business on fire and  stole money he had saved for donations and got away with the DVR for the surveillance cameras from the backroom, apparently to avoid getting caught. 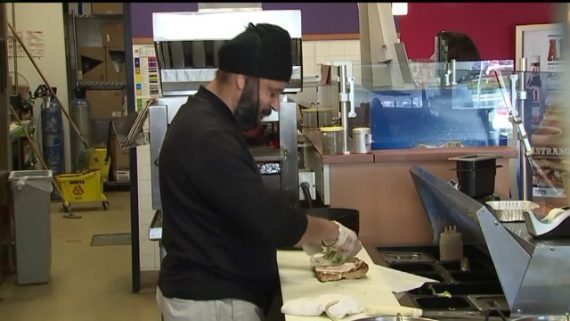 C.J Singh in his restaurant after the attack.

Other disturbed and concerned Sikh business owners and a Woodland City Council member gathered at the Quiznos to support Singh and stand up against intolerance. “”We’re eager to move forward and figure out ways to combat the hatred and the intolerance that’s kind of resonated nationally from this most recent election,” Woodland mayor  Pro Tem Enrique Fernandez. was quoted by local media outlet.

C.J Singh said that earlier in October last year someone came into Quiznos, told him to “go back to his country” then threw a rock on to  the window, the report said. C.J Singh further stated that  he and his family are now shaken and upset but not angry with whosoever insulted their faith. Throughout the day, customers came in to eat at Quiznos to support C.J Singh after hearing what happened.