Lawyers representing the Sikh Federation (UK) have written to Scottish Ministers for failing to include a Sikh ethnic tick box response option in the Census (Scotland) Order 2020 made on 11 March 2020.

Scottish Ministers have been informed by Balfour and Manson LLB advised by Aiden O’Neil QC in a pre-action letter that there is no doubt that UK law recognises the Sikh community has a distinct ethnic identity that was confirmed by the House of Lords in Mandla (Sewa Singh) v Dowell Lee [1983].

Lawyers set out the Census (Scotland) Order 2020 in not including a Sikh ethnic tick box response option is flawed and in contravention of the principle of equal treatment as Sikhs constitute an ethnic identity as well as a religion. 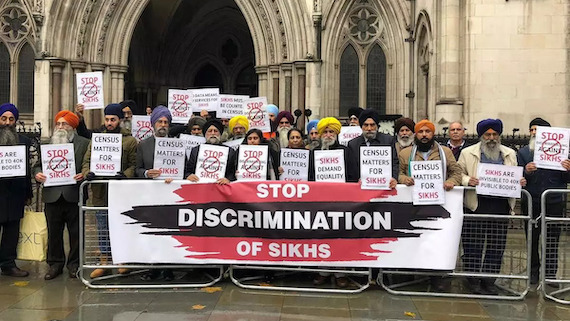 The ethnic groups specified in the census are used by public bodies in Scotland for resource allocation, to inform policy development and make service planning decisions. It also helps public bodies meet and monitor their statutory obligations arising from equalities legislation.

The Sikh Federation (UK) has looked at guidance and practices in different parts of the public sector in Scotland that show public bodies prioritise ethnicity categories as defined by the census with limited or no use of religious data. These details have been shared with Scottish Ministers and highlight Sikhs in Scotland are consistently being overlooked and discriminated against by public bodies in deciding policies that impact on them.

Article 14 of the European Convention of Human Rights and EU law prohibits direct or indirect discrimination based on racial or ethnic origin.  Under EU law to give full and proper effect to the prohibition against discrimination on ethnic grounds it is necessary to accurately collect, collate and record data for identifiable specific ethnic groups.

Scottish Ministers have been notified by not making a provision for Sikhs to be recorded as a distinct ethnic group with a Sikh ethnic tick box response option in the census they are personally in contravention of Public Sector Equality duties imposed on them by Section 149 of the Equality Act 2010.

Scottish Ministers have been asked to confirm they will therefore lay an amended Census Order in the Scottish Parliament with a Sikh ethnic tick box response option or they could find themselves in the Court of Session in Edinburgh accused of discrimination.

The Sikh Federation (UK) has had its legal team send the pre-action letter after it arranged to meet the Cabinet Secretary for Economy, Fair Work and Culture, Fiona Hyslop MSP and Minister for Older People and Equalities, Christina McKelvie MSP on 25 March 2020.  The meeting was postponed due to urgent parliamentary business. A virtual meeting was then rearranged for 2 April 2020 but cancelled by the Ministers due to the Covid-19 crisis. No new date has been offered despite repeated requests. The pre-action letter now needs a response within 14 days.

The Sikh Federation (UK) is concerned with policies and funding in the education, law enforcement and health sectors at the local level. In schools, Sikh children are subject to bullying, hate and discrimination. There is a lack of reporting on incidents of hate crimes perpetrated towards Sikhs.  Further, specific health vulnerabilities reported by leading medical journals about people of Sikh background fail to be properly considered by the Scottish government.

This has been best brought into focus most recently by the outbreak of the Covid-19 pandemic. The Scottish government, health bodies and National Records Scotland (NRS) have been unable to provide data on the number of Sikhs tested positive for Covid-19 or on the number of Sikh deaths occurring from this disease in Scotland. The Sikh community has had to resort to collecting data themselves to make an estimate.  The data collated suggests that in the last two weeks there may have been more than twice as many Sikh deaths from Covid-19 than what is the average for the wider community. Several Sikh Federation (UK) members have become victims of Covid-19 and lost their lives.

Without a specific Sikh ethnic tick box response option in the Census 2021 Sikhs in Scotland will fail to be properly monitored by public bodies in the exercise of their Public Sector Equality Duty and other functions and would as a result continue to face discrimination in terms of the fair allocation of resources and provision of public services.

In her oral evidence before the Scottish Parliament’s Culture, Tourism, Europe and External Affairs Committee (CTEEAC) at its session on 27 February 2020 and in a letter sent the same day to Sikhs in Scotland copied to the Sikh Federation (UK) the Cabinet Secretary Fiona Hyslop MSP confirmed she was proposing that the Census Regulation would include a specific prompt for “Sikh” in the ethnic group question “Other ethnic group”.

Over 150 Gurdwaras and other Sikh organisations across the UK, including a number in Scotland are supportive of this potential claim e.g. Sikhs in Scotland and Gurdwaras in Glasgow, Edinburgh, Dundee and Aberdeen.

Given the broad nature of the legal challenge based on discrimination and EU law in the Court of Session in Scotland it will almost certainly impact on England and Wales.  The Sikh Federation (UK) has simultaneously launched its second judicial review against the draft Census (England and Wales) Order 2020 laid in UK Parliament in 2 March 2020.

In the first judicial review challenge that took seven months in the courts on an expedited timetable the High Court ruled on 12 December 2019 that the claim was too early as the Cabinet Office Minister had not yet laid the draft Census Order in Parliament.  Although the Minister had promised a year earlier that it would be laid in Parliament in Autumn 2019 consistent with the timetable for the census 10 years earlier. The Sikh Federation (UK) lodged an appeal on 3 January 2020 arguing against the ruling and is still waiting on the Court of Appeal to decide on a hearing.

Progress with secondary legislation through both Parliaments has stalled because of Covid-19.  The Cabinet Office is also aware of considerable cross-party opposition to the draft Census Order in Westminster for failing to include a Sikh ethnic tick box response option.

However, officially the Cabinet Office, UK Statistics Authority, Office for National Statistics (ONS), Scottish Ministers and NRS are maintaining the UK-wide Census will take place on 21 March 2021 despite the disruption of Covid-19.

The stakes have now been raised and Cabinet Office Ministers and Scottish Ministers must now decide without input from ONS or NRS officials that have a very narrow view of the Census whether it would be better to agree to the inclusion of a Sikh ethnic tick box response option and get on with the census or continue the battle with the Sikh community in the courts.  The outcome for the Sikh community may be the same, but the reputation of the UK Statistics Authority, ONS and NRS will lie in tatters if the courts declare the process unlawful and Ministers are found guilty of discrimination against Sikhs.