New Zealand: As per media reports, the first Sikh to run for a place on Hamilton’s city council has had his billboard defaced with the name “ISIS” in black paint.

Yugraj Singh Mahil, a Hamilton Sikh and council candidate,  says he and his family are shocked and disgusted after his billboard was tagged with the word “ISIS”. 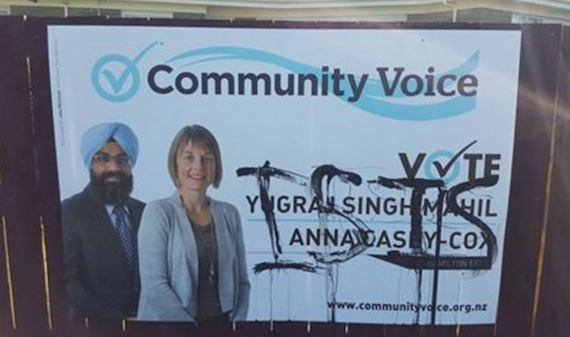 He said the campaign had been going well until he received news on social media that one of his billboards, on the corner of Vesty Ave and Carrington Ave, in the suburb of Hillcrest, was graffitied with the word “Isis”.

“It’s more than insulting,” he said. “People mostly change the appearance of the person but tagging such a group is very harsh, very distressful.”

Fellow candidate Ms Casey-Cox said she found out yesterday when she saw a photo of the billboard on Facebook and within 20 minutes they were able to take the billboard down and clean off the words because the paint was still wet.

He says although he is shaken he will give the campaign his “best and carry on”.