London: As per a press release by the Sikh Council UK, representatives of the Sikh Council UK and other Sikh groups attended a first ever roundtable meeting between the Sikh community and Jeremy Corbyn MP, leader of the Labour Party and Official Opposition on 2 November.

The meeting was coordinated by Sikhs For Labour, a group chaired by Neena Gill MEP and working to improve interaction between the Labour Party and the Sikh community and took place in the Shadow Cabinet Meeting Room in the Office of the Leader of the Opposition in Westminster. 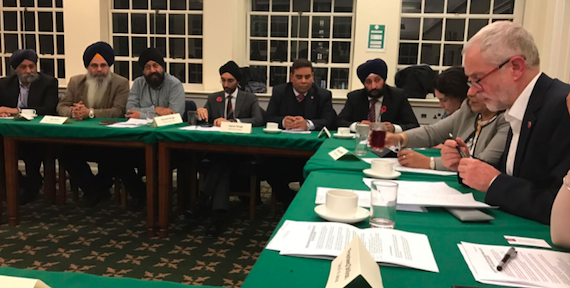 As per release the Sikh Council UK joined representatives of seventeen other Sikh organisations at the meeting. As part of the arrangements a written submission containing eighteen issues was compiled and agreed by all organisations. The written submission was described by Labour leader Jeremy Corbyn as an “excellent” and “really useful document”.

Sikh Council UK Spokesperson and Head of Political Engagement, Gurinder Singh Josan said, “[i]n his closing comments Jeremy Corbyn agreed this should be the first of an annual summit with the Sikh community. He also agreed to facilitate meetings between relevant frontbench teams and the Sikh community to address specific issues and to request participation by representatives of the National Executive Committee in these meetings.”

“By all accounts this was a very successful meeting. The arrangements by Sikhs For Labour and positive engagement by all organisations has propelled the Sikh community forward in the political field. We are now seeking a similar dialogue with the Prime Minister, Rt Hon Theresa May MP. Whilst Sikhs in the UK have been politically active over many years, this meeting shows the community coming of age into a mature way of working”, he added.

Sikh Council UK Secretary General, Gurmel Singh said, “We tabled eighteen key issues in a written submission and had detailed discussions on some issues. These included lack of Sikh representation, hate crime, statutory regulations for Sikh articles of faith, Sikh monitoring in census 2021, human rights abuses in India and residual cases and need for clear labelling on all food in particular meat products. As well as these planned issues the opportunity was taken to discuss the discovery of further documentation relating to UK involvement in the events of 1984 – 1995 in Punjab, India and seek Labour Party support in this campaign. We look forward to continuing dialogue on these issues for the benefit of the entire community.”