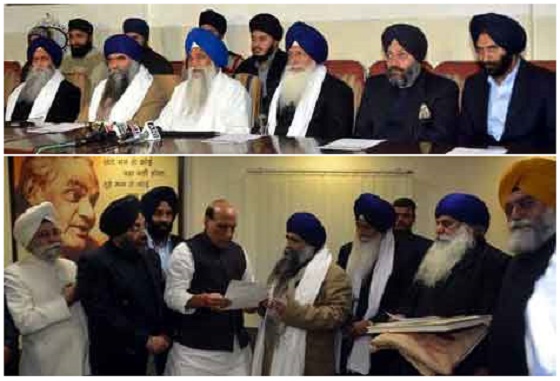 The delegation handed over a memorandum to Indian home minister seeking release of Sikh political prisoners whose release is being demanded by Gurbaksh Singh Khalsa who remains on hunger strike since November 14 at Gurdwara Lakhnaur Sahib, Ambala.

Delegation members Manjit Singh GK, President of Delhi Sikh Gurdwara Management committee (DSGMC) and Manjinder Singh Sirsa General Secretary of DSGMC demanded removal of names of Sikhs residing in foreign countries from ‘blacklist’ of Indian home ministries so that they could visit their families in Punjab and elsewhere in India.

A release by the Sikh Coalition says Indian Home Minister Rajnath Singh accepted the memorandum and in discussions agreed to meet and discuss the cases with relevant officials. He confirmed to those present he will deliver a decision tomorrow.