London: It is learnt that the Sikh diaspora groups in England are panning to hold a protest during Indian Prime Minister Narendra Modi’s visit.

In a written release issued yesterday, the Sikh Federation UK said: “Sikhs are expected to turn out in their thousands when the 53 Heads of Government gather at the QEII Centre in London in mid-April for the Commonwealth Heads of Government Meeting (CHOGM)”.

“The primary focus of Sikhs protesting will be the Indian PM, Narendra Modi, but they will also be there to show support for the Canadian PM, Justin Trudeau for standing up for the rights of Sikh nationalists when he recently visited India”, said the Sikh activists body. 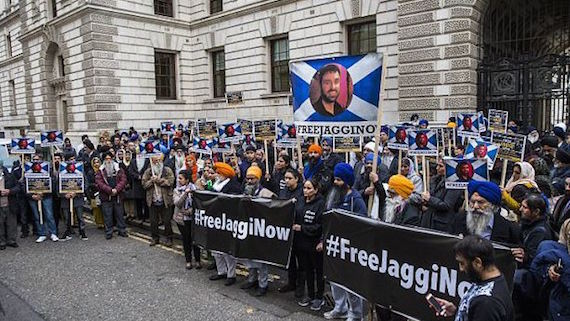 Furthermore, the group has maintained that the Sikhs will not be protesting alone with many other minorities prosecuted in India joining hands in a show of unity in opposing the policies of the extreme Hindu right wing governing India and wanting to turn it into an exclusively Hindu state.

In the run up to CHOGM Parliamentary pressure has been created in the UK and several other Commonwealth countries urging heads of state to take up the treatment of minorities in India, it added.

It is notable that the issue of Scottish citizen Jagtar Singh Johal, who was arrested by the Indian police during his visit to Punjab in last November has further polarised Sikhs against the Indian state.

By the time Narendra Modi arrives Jagtar would have been held in jail for more than 160 days without charge.

“Many UK politicians are furious that the Indian authorities have to date refused to grant private access for Jagtar to meet British consular staff given his constant allegations of torture and mistreatment when in police custody. Despite repeated requests Jagtar has been denied an independent medical examination confirming suspicions of torture”, the Sikh Federation notes in its release.

On the issue of Jagtar Singh Johal, the Sikh body further notes in its release: “The latest setback came a few days ago following a petition for an independent medical examination in the Punjab and Haryana High Court that was lodged nearly four months ago”.

“At the court hearing on 22 March the high court appallingly decided to delay the decision of whether or not to grant an independent medical examination by another four months until 23 July”.

“This latest ridiculous decision would not have been lost on UK politicians and the government who have already complained to the Indian authorities about Jagtar facing trial by media with the unprecedented release of confidential police interrogation videos”.

UK Foreign Office officials have made clear to the Indian authorities that if Jagtar is charged he will not get a fair trial.

There has been pressure for the Foreign Secretary to meet Jagtar’s family, who are concerned with the inability of the UK government to make any headway with the Indian authorities.

“I want to stress that we in the UK Government are doing everything we can to ensure that Mr. Johal has access to justice; that we raise the conditions in which he is being held and we insist that he must be given proper free and fair legal process and a fair trial.”

This latest statement from the Foreign Secretary on the eve of Narendra Modi’s visit simply sets out what the UK Government should do if they are concerned for a British citizen, but no doubt will be seen by the Indian authorities as British interference.