The Sikh Empire Exhibition in Melbourne from 17th December

Melbourne (Press Release): To raise awareness about the Sikh identity, history and values, the first 4 day Sikh Empire Exhibition is being organised in City of Melbourne from 17th to 20th December 2016.

Harkirat Singh, General secretary of Supreme Sikh Council of Australia Inc., said “We want to make our sangat aware of our great Khalsa raj and give them a feel of what our own empire achieved. By having this exhibition in the City of Melbourne’s Multicultural hub, we also want to raise awareness about Sikh Identity and values in mainstream Australian community. 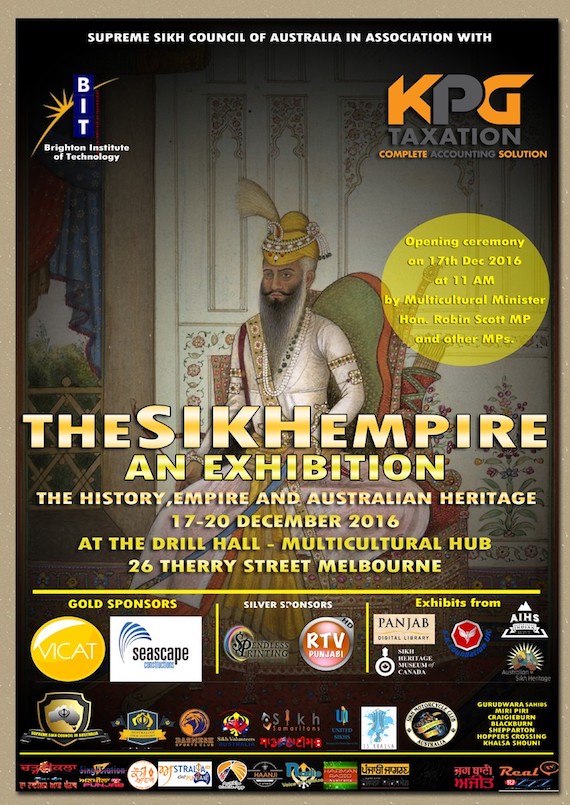 Various Members of Parliament and leaders from all multicultural communities will attend the opening ceremony which will promote understanding in the society about our identity”.

The Exhibition will have three sections on Sikh History, Sikh Empire and Australian Sikh Heritage and will be attended by Bobby Singh Bansal from UK who has done extensive research on the remnants of the Sikh Empire, Mr Dinesh Singh Attari-direct descendant of Sardar Sham Singh Attariwala and Mr. Shahid Shabbir who is working in Pakistan to find Sikh heritage monuments.

Birender Singh, President of Supreme Sikh Council of Australia, said “ There will be a forum after the opening ceremony where sangat will be able to engage with the international speakers and knowledge about the Sikh empire and history. About 70 percent of the Sikh heritage sites are in Pakistan and speakers like Mr Bobby Singh Bansal and Mr Shahid Shabbir will give a great insight into the condition of these monuments”

The organisers said that there will be lots of artwork, documents and reports from 19th Century sent by various sources and requested the community to attend in large number with their families to connect to the history. City of Melbourne, Victorian Multicultural Commission and Multicultural hub are promoting the event.