Dubai: A Sikh engineer was reportedly honoured in the UAE few days back for saving passengers’ lives in a fiery Canadian plane crash in 2011.

Media reports say Mandeep Singh was awarded the decoration for bravery by Arif Lalani, the Canadian ambassador to the UAE, for his heroic act at Richmond, British Columbia, in October 2011. Mandeep Singh, 32, works for FlyDubai.

“I was in Canada working with an Indian IT company and a Canadian helicopter corporation on a project,” Mandeep Singh reportedly said. 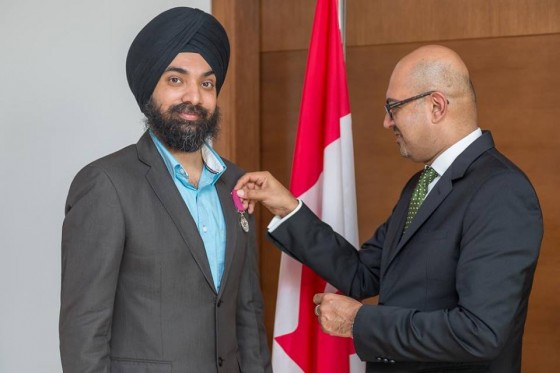 Mandeep Singh, left, receives a decoration for bravery from Arif Lalani, Canadian Ambassador to the UAE, in Abu Dhabi

“We were on site and we were leaving the office in the evening. As we were waiting at a traffic light, a plane crashed just 100 yards in front of us on the other side of the road. My first reflex was to open the car door and run to it”, The National UAE quotes Mandeep Singh.

When he reached the 15-seat aircraft, crashed on the road just short of the airport runway in the Vancouver-suburb city, he saw a couple of passengers stumbling out, injured, The National UAE notes.

“A few other people and myself went in and took other people out of the aircraft,” he reportedly said. “The moment the plane crashed, it was completely on fire. It was really bad”.

“When I stepped on to the aisle of the plane there was smoke, but thankfully the wind blew it away from us. If it was the other way around, it would have been impossible to even get near the door.”, he added.

The IT specialist, who moved to Dubai in June, said he was not scared.

“I work in the airline domain, and in engineering specifically, so I was aware of the fuel and aircraft parts,” he said. “I saw the fuel leaking out near my feet so at that moment I felt like I was in the movies but I didn’t react.”

“We were about seven to eight people helping,” he said. “Passengers were barely able to move but we wanted to comfort them until the fire-brigade came 10 minutes later.”

Mandeep Singh said he felt lucky the aircraft did not explode in the crash where the two pilots died from severe burns.