It is the largest political gathering of its kind of members of the Sikh community in the diaspora.  The main speeches and a number of key announcements were delivered yesterday. 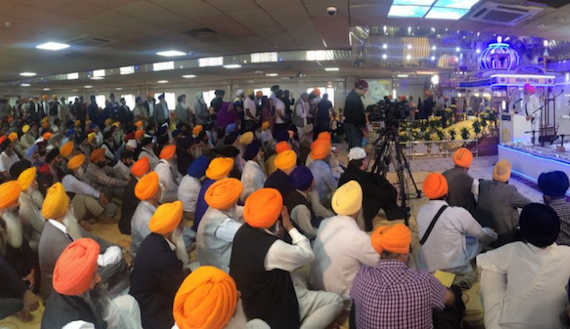 A view of gathering during Sikh Federation UK’s annual conference

Bhai Amrik Singh, the Chair of the Sikh Federation (UK), delivered the key note speech setting out what the organisation had achieved with respect to delivery against the promises made last year, the organisations key activities and successes over the last 12 months, how it was responding to the challenges that exist and giving direction in a number of key areas.

The audience for the Convention is worldwide so Bhai Kuldip Singh, the Vice Chair of the Sikh Federation (UK), spoke about the organisations views about the forthcoming elections in Punjab in 2017. Several UK politicians spoke about some of the ongoing campaigns being championed by the Sikh Federation (UK), achievements during the year where politicians were assisting the organisation and promises on other things that could be delivered.

The Sikh Federation (UK) announced expansion of its leadership and advisory capacity given the growth of the organisation to virtually all regions of the UK and larger presence in many more towns and cities.  It also reflects the increasing workload in the UK and abroad with greater demands from the mainstream media and shift in the working relationship with the UK Government.

As per a press release by Sikh Federation UK, some of the key announcements made during the conference were: