London: The Sikh Federation UK reiterated its demand for public inquiry into British role in June 1984 Indian Army attack on Darbar Sahib Amritsar, which marks the bigenning of third Ghallughara of Sikh History.

One of the resolutions passed by the Sikh body in its annual conference held at Guru Nanak Gurdwara, Willenhall on Sunday (Sept. 16) relates to continuing the campaign to establish the truth by never dropping the demand for an independent public inquiry into UK government involvement in the 1984 Sikh Genocide and anti –Sikh measures in the 1980s in the UK. 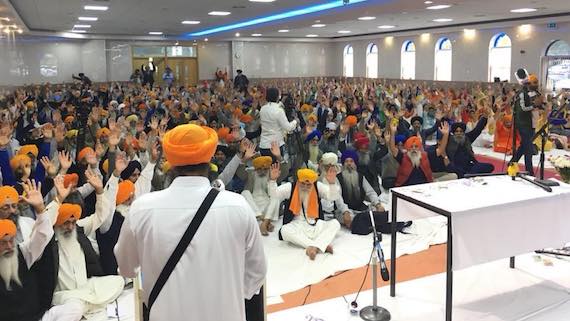 A view of convention by Sikh Federation UK

The Sikh body said that it has sent a strong signal to all UK politicians that they need to read and reflect on the Sacrificing Sikhs report that we commissioned based on around half of the UK government papers available from the md-1980s.

“The report is a real eye opener and alone proves that Parliament and the public were misled in February 2014 by the Sir Jeremy Heywood review commissioned by David Cameron”, a statement by Sikh Federation UK reads.

“Lawyers acting for the Foreign Office have yet to provide a substantive response to the report personally handed to the Foreign Secretary on the 1 November 2017 and nearly 11 months later continue to ask for more time”.

“If politicians were looking for further proof they need not look further than the unanimous legal judgement against the Cabinet Office and Foreign and Commonwealth in June 2018”.

It may be recalled here that Judge Murray Shanks, who presided over a three-day hearing concluded there was “a very high public interest in disclosure of the withheld information” and stated “we also acknowledge the limitations of the Heywood review . . . in particular the speed with which it was carried out and the limited time period of the files that were looked at”.

Notably, Jeremy Corbyn the Labour leader has reiterated the party will once again include the commitment to an independent public inquiry in a future Labour manifesto.

“In the coming months constituents will be asking all MPs what if any action they have taken in the last 12 months following the Sacrificing Sikhs report and the legal judgement that both point to the need for an independent public inquiry”, Sikh Federation UK said.