London: The Sikh Federation (UK) said in a written release issued today that it has written to the Sunday Times responding to an article published on August 5 with the sensational headline “Assassination suspect plans Sikh separatist rally in Britain”. 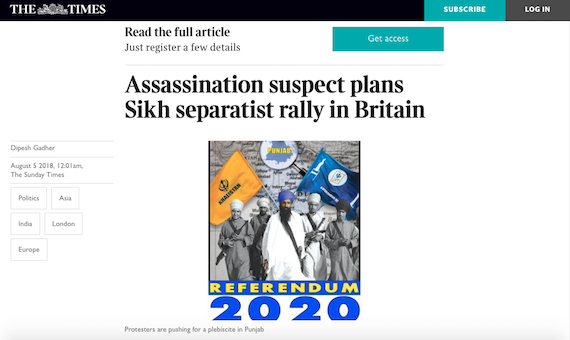 We were most disturbed by your sensational headline “Assassination suspect plans Sikh separatist rally in Britain”.

Anyone living in the UK has the right to peacefully protest provided you have obtained the necessary permissions from relevant authorities.

We assume the organisers, USA based Sikhs For Justice, obtained the necessary permissions/licences from the Greater London Authority for the event in Trafalgar Square next week before publicising the event.

The so-called ‘Referendum 2020’ campaign launched more than four years ago in the USA is nothing more than an unofficial opinion poll and another small step to raise awareness on the treatment of Sikhs by the Indian authorities and the continued demand for a Sikh homeland.

As usual the Indian authorities are over reacting to the Sikh Diaspora and resorting to misinformation. Since 1966 the Indian state in accepting the right to self determination at the UN imposed an unacceptable ‘reservation’ that it could not apply to the people of India. No doubt fearing a break up of the country with a number of legitimate secessionist movements.

The right of self-determination is a basic human right and absolutely fundamental to the protection of individual rights. The vast majority if not all UK politicians support this right based on international law.

The Sikhs right to self determination is helpfully summarised in the Sikh Manifesto. We have engaged with UK MPs from all political parties, Ministers and shadow ministers, foreign governments and those at the UN. They have all responded positively to the arguments presented.

UK Government ministers of different political persuasion in meetings with us have also acknowledged the historical context as Sikhs were the third party with whom the British negotiated the transfer of power in 1947.

There is also a recognition that Clement Attlee’s Labour government at that time offered Sikhs a separate homeland. The Indian authorities are therefore extremely sensitive and suspicious, as we are well aware, of anything happening in Britain that vaguely promotes the demand for a Sikh homeland.

However, calls for the reestablishment of a sovereign Sikh state, given the 1849 British annexation of the largest sovereign Sikh state that existed for 50 years and was recognised by all the world powers are not new. In the period leading up to the creation of India and Pakistan in 1947 several resolutions were passed by Sikhs for an independent Sikh State.

Politicians and a number of governments across the globe understand the mistreatment and discrimination of the Sikhs since partition in 1947. They are also aware of the peaceful agitation by Sikhs for greater autonomy in the 1970s and 1980s and the Indian regimes’ brutal response ultimately resulting in the 1984 Sikh Genocide. This was followed by a decade of false encounters, torture and extrajudicial killings by Indian police and paramilitary forces for which the Sikhs have had no justice.

In our view the reestablishment of a Sikh homeland is inevitable with the Sikh Diaspora leading the way and gaining the direct support of world powers like the USA and China with a vested interest and countries like the UK, Germany, Canada and Australia to name a few, also playing their part.

Both India and Pakistan know they will in due course be forced to break apart and a strong and resourceful Sikh homeland extending well beyond ‘Indian occupied Punjab’ respecting the rights of all living there will emerge.