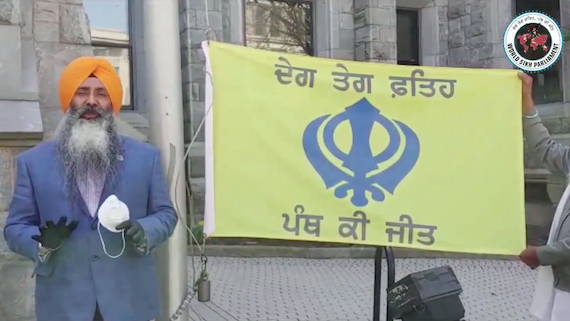 29th April 2020, Washington DC: The month of April is important for the Sikhs. This month in 1699, Sri Guru Gobind Singh ji, the 10th Guru of the Sikhs blessed them with Khande-Ke-Pahul (Amrit), giving them a different identity and establishing the order of the Khalsa.

Due to the COVID-19 pandemic, the world is in a state of lockdown. However, the Sikhs in America are repeating history in Holyoke, Massachusetts. Gurninder Singh Dhaliwal, the member of the Religious Council of the World Sikh Parliament, did the efforts to grant the opportunity to raise the Sikh flag along with the American flag in the city hall of Holyoke. Present during this occasion were Himmat Singh, Coordinator of the World Sikh Parliament, Gurninder Singh Dhaliwal, Treasure of World Sikh Parliament US Region, Charanjit Singh Samra, Kuljeet Singh, and officials of the city were also present. Mehar Singh did Ardaas (prayed) for Sarbat da Bhala (prosperity for all).

It is an honor for all the Sikhs living in America. The Sikh flag today waves along with the American flag” and he continued that, “The World Sikh Parliament is able to get this opportunity because America symbolizes the belief to ‘Religious Freedom’ while respecting all religions. It’s a shame that India that claims to be the largest democracy but oppresses their minorities”. The ceremony concluded with prayers and a message to the world community that the World Sikh Parliament continues to work tirelessly to preserve the dignity, honor and welfare of the Sikh Nation.