Washington: A Federal Appeals Court in Manhattan has reserved the decision in the rights violation case filed against Congress president Sonia Gandhi for allegedly shielding and protecting Congress party leaders who lead death squads after the assassination of PM Indira Gandhi. The case was filed by US based rights group Sikhs For Justice and has been dismissed by a US district court.

On August 18 a three Panel Judges of United States Court of Appeals second Circuit heard the arguments on whether the lawsuit against Sonia Gandhi would be allowed to proceed as appealed by the SFJ or the US district courts order of dismissal would be affirmed. 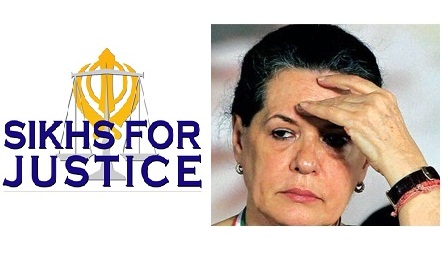 In June 2014 Federal Judge Cogan dismissed the lawsuit against Sonia Gandhi ruling that Congress President is not liable under Torture Victims Protection Act (TVPA) for “shielding and protecting” those who perpetrated genocidal violence against Sikhs and that the plaintiffs have no standing to bring the lawsuit.

A Class action suit was filed by US based rights group SFJ and victims against Sonia Gandhi under Alien Tort Claims Act (ATCA) and Torture Victim Protection Act (TVPA) for shielding and protecting Congress party leaders who organized genocidal violence against Sikhs in November 1984.

“After being victim of Genocidal violence 1984 survivors have also become victims of justice” stated SFJ legal advisor Gurpatwant Singh Pannun adding, “We are building our case against the Government of India for being responsible for organizing and executing killings of Sikhs and then providing immunity with impunity to the perpetrators”.