Melbourne, Australia: The Sikh diaspora in Australia will be holding a remembrance march on November 04, 2017 in the memory of Sikhs killed during November 1984 Sikh Genocide.

The Supreme Sikh Council of Australia- the organiser of the Sikh Genocide Remembrance March, said that the purpose of the event is to remember those who were killed in the genocide and to raise awareness against the genocide.

As per details extended by SSCA, participants to the Sikh Genocide Memorial March will gather at Fed Square at 10 am and March will start from Fed SQ at 11 am. Activists, leaders of various communities and politicians will address the gathering at State Library from 11:30 am and the program will conclude at State Library at 1 pm. 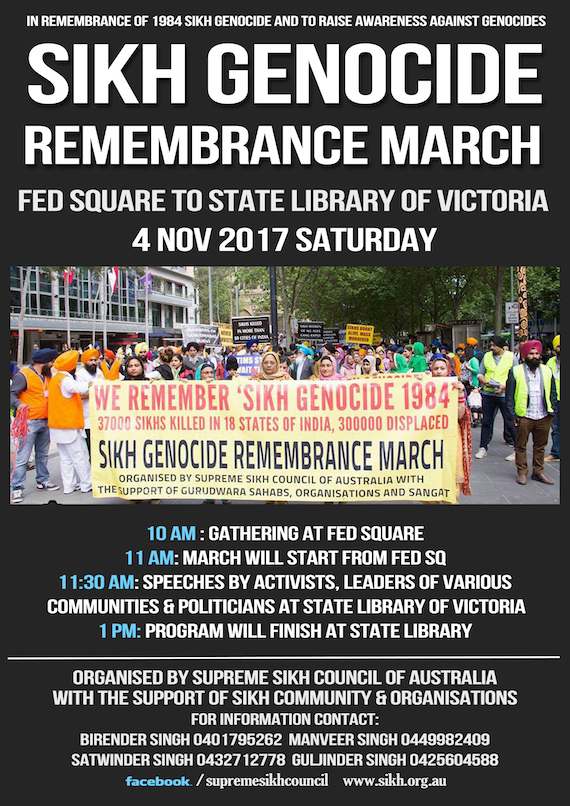 It is notable that Sikhs were subjected to genocidal violance throughout India in the first week of November 1984. In these massacres thousands of Sikhs were burnt alive, their properties worth crores were reduced to ashes and thousands of survivors were displaced. Whereas the justice remains denied to the victims of these inhuman massacres and perpetrators being protected by the Indian state, the Sikhs across the globe remember the victims and honour the surveyors by holding remembrance events. In recent years many international entities have recognised the November 1984 violance against the Sikhs as ‘genocide’. Around a dozen city councils in Untied States of America (USA) have issued proclamations in this regard and recently the provincial parliament of Ontario officially passed a motion terming the November 1984 events as ‘genocide’. A similar motion was adopted on June 30, 2015 by Delhi state assembly in India.