Gobindgarh: Hindutva fountainhead Rashtriya Swayamsewak Sangh had planned to carry out a march with arms on Monday (June 19) in the Gobindgarh town of Punjab. The move was opposed by Sikh groups, including the United Sikh Party (USP) and the Shiromani Akali Dal Amritsar (Mann) who had raised the apprehension that the Hindutva activists could do certain activity offending the Sikhs. They cited the incident where Hindutva activists had burned an effigy in Amritsar on the 33rd anniversary of Ghallughara June 1984.

The administration had deployed heavy police force in the town to prevent any standoff between the two sides. Sikh activists also handed over a memorandum to Amloh D.S.P to take out necessary steps to prevent Hindutva activists from taking out their march in which they were set to carry and showoff their arms. 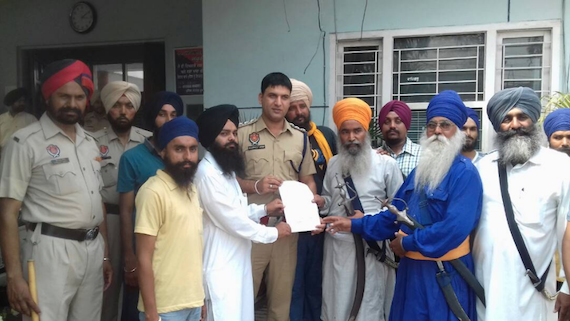 Sikh activists handing over memorandum to a police official

By the afternoon the town was turned into police cant as the RSS had announced to carry out their march in the evening and Sikh groups were adamant on preventing it.

The Sikh groups expressed satisfaction after the Hindutva group did not take out the controversial march. “We kept waiting at Dana Mandi of Gobindgarh from where RSS activists were to take out their march but no one turned out to take out the march”, Jaswinder Singh of USP told SSN over phone.