Ludhaina: A stunning information has come out with regard to Sidwan Bet incident where police and villagers had clash on May 16 over handing over a disputed land to the family of a deceased Indian army veteran. As per information the Punjab police had brutally beaten up the “granthi” of local Gurdwara Sahib for allegedly making an announcement about arrival of the police in village.

The police did not only beat up the granthi in public view but also disrespected his “kankars” (5Ks) – articles of faith. The police entered in Gurdwara Sahib and climbed to Gurdwara roof with shoes showing disrespect to Guru Granth Sahib. The police also arrested the granthi and filed a case against him. 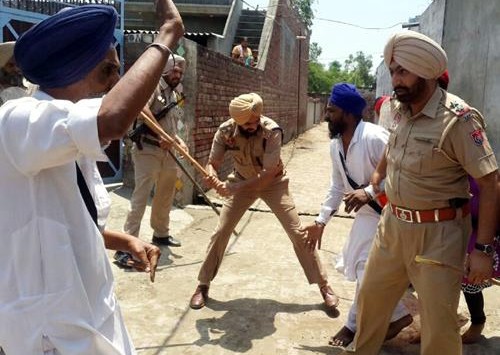 Police beat up Gurdwara Granthi over making an announcement in Gurdwara [May 16, 2015]

It may be recalled that more than thirty people, including 12 police personnel were injured in a clash between villagers and the police at Kannian Hussaini village, near Sidhwan Bet on May 16. The police had reportedly gone to the village to assist the local administration in getting vacated the land allotted to the family of Sino-Indian war veteran Bhag Singh so that its possession could be handed over to his’s family.

The police action has invited sharp criticism over the social media also.