Geneva: Sikh Human Rights Group (SHRG) raised the issue of November 1984 massacre of Sikhs as ‘genocide’ at a UN Human Rights Council meet in Geneva. SHRG chairperson Dr. Jasdev Singh Rai read out a written statement in the UN HRC and said that as per the understanding of the SHRG’s understanding of the definition of genocide, the massacres constitute the crimes of ‘genocide’. 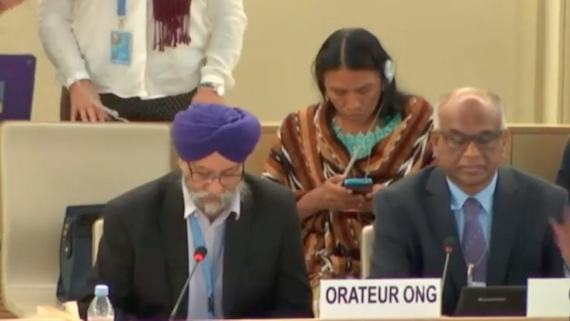 The statement says that SHRG recognises that “efforts have been made through 11 commissions of enquiries and attempts made to convict the leading perpetrators but judicial process has frustrated justice”, which gives an impression that as per the group’s understanding denial of justice to the victims of 1984 Sikh genocide was due to judicial, not political, failure of the Indian system.

While referring to Ranjath Singh’s statement that the 1984 massacres were in fact genocide, SHRG expressed hope that the Indian state will recognise the fact of genocide. The hope is however in contrast to recent actions of the Indian government to stall the process of international recognition for the fact of Sikh Genocide. Indian state’s interference in the process was exposed with its efforts against “Sikh Genocide Motion” that was passed by the Ontario provincial parliament in April 2017.

“Sikh Human Rights Group welcomes the report of the Special Advisor on Prevention of Genocide and appreciates the mandate may not extend to retrospective identification of genocide. However we urge the Advisor and the HRC to monitor progress of justice for victims of previous crimes of genocide, efforts made by the concerned States to punish the perpetrators as well as steps taken to prevent such further crimes, particularly where the issue remains in the public domain.

We draw the attention of the HRC to the organised massacres of over 4000, possibly 10000 Sikhs in Delhi in November 1984 by attackers who were bussed in and supplied weapons and lists. The homes and shops of Sikhs were targeted, they were dragged out and killed with iron rods, clubbed to death and many burnt alive with tyres around their necks.

The targeting of a single community by organised mobs aided by powerful people holding political positions in the State and when the police as well as Army remained inactive for four days constitutes genocide according to our understanding of the definition.

We applaud the bold, emotive and public statement by the current Indian Home Minister Shri Rajnath Singh in calling these crimes genocide in a public gathering. We hope the Indian State will also officially recognise the four days of massacres as genocide.

We recognise that efforts have been made through 11 commissions of enquiries and attempts made to convict the leading perpetrators but judicial process has frustrated justice. Independent reports have identified the Indian Congress Party to be responsible. This party held power until recently. Its leader apologised for the crimes but failed to convict the perpetrators when his party was in power.

We urge the Indian State to take further measures to officially identify the political party responsible, hold the senior politicians of the party to account and take steps to prevent such heinous crimes that remain a blot on the history of India.

We request the HRC to monitor the progress of and assist the current Government in its efforts to deliver justice for victims and punishments of those responsible for the Nov 1984 Genocide of Sikhs in Delhi and surrounding areas.”