Saint Louis, MO: Investigative Reporter Prabjot (PJ) Kaur Randhawa became the first Sikh Broadcast Journalist to take home a prestigious American Emmy Award. Prabjot Kaur was awarded the honor in the Health & Science category for her investigative on prescription medications errors. Her investigation revealed that large chain pharmacies are putting profit over safety, by requiring pharmacists fill more prescriptions per hour. The end result, PJ uncovered, is that a surprising number of customers go home with the wrong medication- which can be fatal. As part of her report, PJ questioned the state Pharmacy board and discovered they are taking no action to monitor these corporate pressures, or ensure the safety of the public. 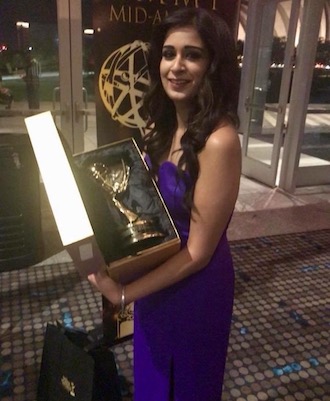 “I feel an obligation to uncover instances where corporations put profit over public safety. As a Sikh and as a Journalist, I believe it is my duty to uncover practices that can hurt or take advantage of the public. My strong belief system, rooted in my Sikh upbringing, reinforces my personal mission to uncover wrongdoing and shed light into the darkness we find in every aspect of society. I want people who read or watch my stories to come away with information that can benefit their families, and enrich the quality of their lives.”

A native of Winnipeg, Manitoba, PJ is a graduate of DePaul University’s prestigious Journalism program, where she earned her Master’s degree in 2011. She has since worked in almost every corner of the country. PJ began her career as a Morning News Anchor at the ABC TV affiliate in Rapid City, South Dakota. In 2013, she became an Investigative Reporter for the NBC TV in Columbia, South Carolina. During that time, she received the 2013 World Sikh Award for her political reporting. She also received the 2014 School Bell Award for her Education reporting. Her investigations were routinely seen in five cities across three states.
Since 2015, PJ has been an Investigative Reporter at KSDK NBC in St. Louis, Missouri. She is a four time Emmy Nominee, and was also nominated for a Missouri Broadcasters Award in 2018.