Melbourne: A Sikh man Harjinder Singh Kukreja reportedly skydived from a plane while wearing a turban. He said that his move was aimed at spreading awareness against ban on turbans imposed by various institutions or countries.

He said French Sikhs had been forced to put their children in private schools or leave France. 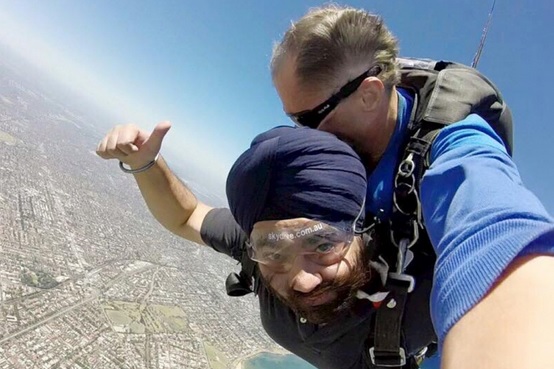 “Our voice has been the loudest, because it affects us the most,” he said.

“It’s a part of who we are and it’s not something we add on.”

Mr Kukreja said he supported religious freedom for everyone.

The restaurant owner from Ludhiana, Punjab, said he decided to jump during his recent Melbourne holiday.

He said the message was timely as freedom of speech was in the spotlight after the recent shootings in Paris.

Mr Kukreja said he believed the French magazine at the centre of the shootings, Charlie Hebdo, had exploited freedom of speech, but he condemned the retaliation.

Mr Kukreja said skydiving was not popular among Sikhs.

“When you fall at 200 km/h speed, you’re not really sure if the turban will fall off,” he said.

“So I made sure, I did three or four things, like I tied it under my chin.”

Was it worth it?

“The scariest part is only for a few minutes to jump out of the plane,” he said.