USA: A demonstrator was reportedly Donald Trump’s rally in the US state of Iowa. The protester reportedly interrupted the Republican presidential frontrunner’s speech by displaying a banner that read ‘Stop Hate’.

The protest started when Donald Trump was speaking about the 9/11 twin-tower attack in New York. As soon as the Sikh man who was wearing red Turban showed up a banner that read “Stop Hate” he was escorted out of the rally amidst the chanting of “USA, USA, USA”.

As per media reports [a]s the Sikh raised his banner, he waved his hand and said ‘Bye. Bye. Goodbye’. 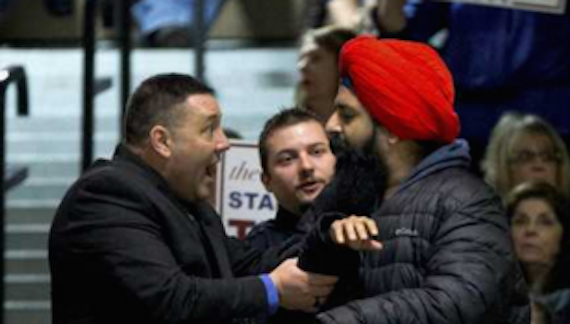 “He wasn’t wearing one of those hats was he? And he never will, and that’s OK because we got to do something folks because it’s not working,”, initial media reports quoted Trump to have said.

But an update by the Sikh Coalition says: [b]ased on evolving news reports, it’s unclear whether Trump’s statement (“He wasn’t wearing one of those hats, was he?”) was directed at the Sikh man, or somebody else in the crowd.