Amritsar, Punjab: An annual “Shaheedi Samagam” was held at Akal Takhat Sahib today in the memory of Shaheed Sant Jarnail Singh Bhindranwale and other great Sikh martyrs who had laid their lives during Indian Army’s attack on Darbar Sahib in June 1984. The Ghallughara remembrance samgam marked 31st anniversary of June 1984 Indian army attack on Darbar Sahib, Akal Takhat Sahib and other Sikh Gurdwaras. 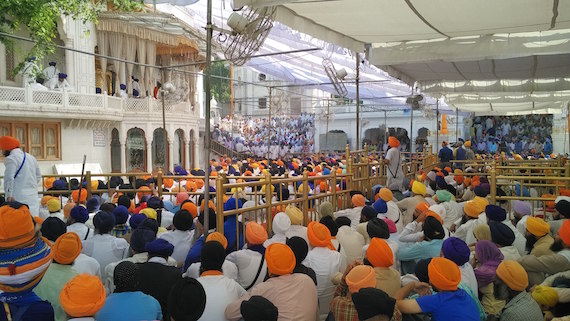 A view of Sikh sangat’s gathering at Akal Takhat Sahib 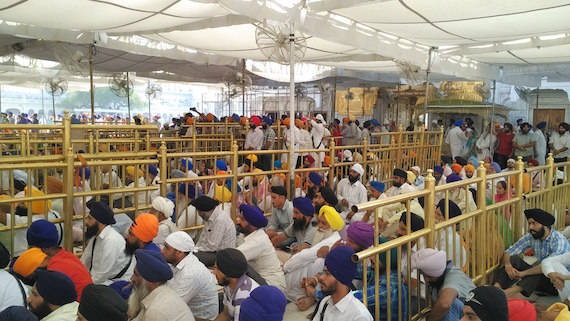 After the Akal Takhat Jathedar finished his message to the Sikh panth, slogans of ‘Khalisatan-Zindabad’ were raised by Sikh sangat present in front of Akal Takhat Sahib. The situation had turned tense as there was heavy deployment of SGPC’s task force and police personnel, including lady cops, in civil dress.

At 7.15 am, Bhog of Sri Akhand Path Sahib was held in memory of Sant Jarnail Singh Bhindranwale, Bhai Amrik Singh and other martyrs of the holocaust. Afterward, Gurbani Kirtan was recited by Bhai Inderjit Singh, Hazuri Ragi of Sri Darbar Sahib.

At 8 am, Ardas was performed. At aroudn 8:15 am Jathedar Akal Takhat Sahib shared his with the Sikh sangat. After that kin of martyrs were honoured with Siropaos. 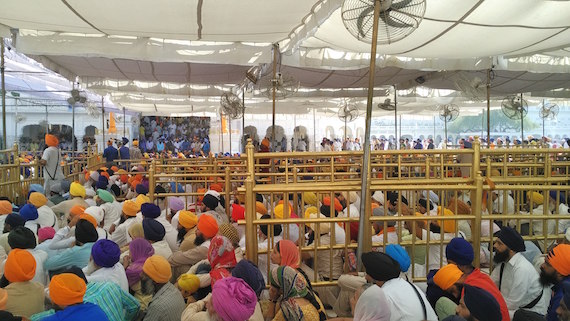 Another view of Sikh sangat’s gathering at Akal Takhat Sahib

It is pertinent to mention that slogans of ‘Khalistan-Zindabad’ were echoed by Sikh youth in great number for more than half an hour.

Highlights of Giani Gurbachan Singh’s Messages to the Panth:

In his message to Sikh nation, Akal Takht Sahib Jathedar Giani Gurbachan Singh said that deep pain in Sikh feelings caused by deadly attack of Indian army could never be killed. “This is the Ghallughara that can never be forgotten by Sikhs, he said.

“The contemporary governments have been trying to hit dignity of Sri Darbar Sahib and Sri Akal Takht, but Khalsa has always defeated them following its great traditions. Even after 31 years, pain of the barbaric act of the state still alive in Sikh mind in fresh form. At present, Sikh nation faces multiple problems. Sikhs should find out the solution of these problems”, he said, adding, “Our young generation was hunted by the state before, now by drug menace. So, Sikh should initiate to organize drug-de-addiction camps and also work for ending female feticide.”