Washington, May 10, 2016: Gurdwaras from all over the Washington and Baltimore came together for the second time for the Vaisakhi Sikh Day Parade in Washington, D.C. on Saturday, May 7, 2016. Organizers had specially made banners conveying the message of Sikhism to Americans: Sikhs Love America; Sikhs stand for Gender Equality; and Sikhs for Racial Equality. Many tourists and common Americans were taking pictures of the front banner which said, “One God, One human Family, Respect All Religions.” This message seemed to resonate as the political campaign season this year has seen a rise of hate speech across America. Entire parade was interspersed with American flags to show the pride of being Sikhs and Americans. 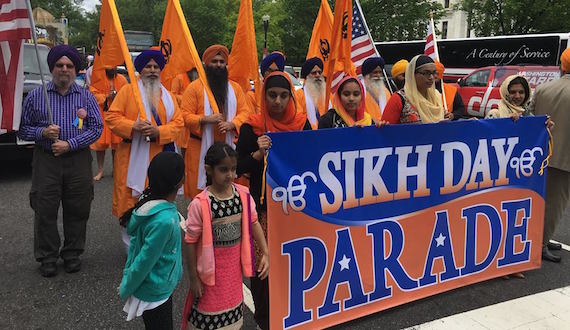 Ten gurdwaras of Maryland, Virginia and Washington, DC had encouraged the community across the metropolitan area to come together to celebrate the Khalsa argat Dihara (Vaisakhi) in the nation’s capital. The program started with kirtan near the World War II memorial grounds and Lincoln Memorial. After the parkash of Guru Granth Sahib, kirtan was performed by Bhai Jagmohan Singh and Harmohan Singh of GNFA, and Bhai Kirpal Singh, Onkar Singh and Karam Singh of Sikh Foundation of Virginia. After the conclusion of the morning kirtan, each gurdwara sangat gathered behind its own organization’s banner. Panj Pyaras, each coming from a different Gurdwara, led the procession by holding Nishaan Sahib. Slowly the parade started moving on the Constitution Avenue. This famous avenue is one of the most famous roads in Washington, DC as all the major landmarks are situated on this famous thoroughfare. The White House, Washington Monument, National Archives, and various governmental headquarters and large museums are all located on this street. 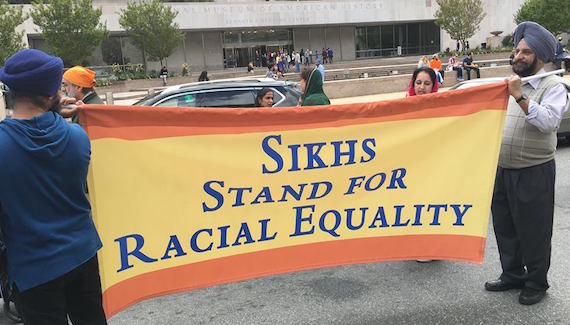 Although in the morning the sky was a bit cloudy with some drops of rain, the sky cleared by 12 noon and the sun started shining. This changed the atmosphere and mood of the Sikhs who had especially dressed for the occasion. Most of the people had Kesri color outfit matching with the theme of the day. For the second year in a row, Sikh sangat had come together from various gurdwaras to sing Gurbani and raise the slogans of Degh Tegh Fateh in Washington, DC.

First float had Guru Granth Sahib under a canopy. This provided a spectacle for the onlookers who were pleasantly surprised with this sea of turbans in the heart of America. Buses came from various Gurdwaras to make sure that families with children and elderly reach the venue without much strain.
This was followed by truck on which ragis from various Gurdwaras of the Washington area took turns to sing gurbani and people from far distances could hear this reverberations of Guru’s bani sung beautifully by talented ragis and Dhadis.

Procession featured Gatka by the children of the Guru Gobind Singh Foundation. 6 years olds to 30 years old young men played together this sport on the Constitution Avenue while passing through various traffic lights. People in the cars and others walking these popular spots in DC saw these young people showing Khalsa spirit.

Second float was of the Sikhs of America which declared Sikh Values are American Values. On the side of the float it said, Sikhism is the 5th largest religion. Many Sikh men and women waived to the passers-by.
All major Gurdwaras had pooled resources to pay for major expenses. The cooperative spirit was at display by all the representatives of the Gurdwaras making sure that all the participants of the parade were cared for during the parade. Each gurdwara representative was filled with joy and felt genuine collective pride for succeeding in making this undertaking a huge success.

Water for the entire sangat was provided by Malwa Transport. A food trailer driven by a tractor was brought by Sikh Center of Virginia. Sound system was provided by Lucky Sandhu of Platinum DJ. At the conclusion of the parade, Sikhs gathered in front of the Capitol Hill on the grounds of National Mall for their favorite community celebration which is to eat langar together. Entire food was prepared and brought by sangats of all the gurdwaras. Fruit was provided by the courtesy of Lakhbir Singh and family.
Various Gurdwara representatives were invited to address the gathering and stage was ably handled by Harbans Singh Sandhu. Among those who addressed were: Parmvir Singh from Sikh Foundation of Virginia, Parmvir Singh Soni of GNFA, Kewal Singh of Sikh Society of Baltimore, Jinderpal Singh Brar of Sikh Association of Baltimore, Harbhajan Singh Chahal of Sikh Center of Virginia, Dr. Pavan Sawhney of DC Gurdwara, and Dr. Rajwant Singh of Guru Gobind Singh Foundation.