New York, USA: The US based Sikh civil and human rights groups have declared their support for Bapu Surat Singh Khalsa’s free Sikh Political Prisoners movement and to internationalize this issue will hold a “Freedom Rally” on Oct 17 at Times Square in New York City.

Bapu Surat Singh Khalsa, a Sikh civil rights activist has been on a fast-unto-death since January 16 for freedom of prisoners of conscience who are still being held in jails despite completing their sentences. Khalsa was forcibly removed from his village on Sept 26 and is presently being held at PGI, Chandigarh.

Sikh political prisoners across several jails in India are still languishing there even after completing their jail-term, and Bapu Surat Singh Khalsa is on hunger strike to get them released.

“There are prisoners of all other religions who have been released after completion of their jail-terms but the arbitrary forcible detention of Sikh political prisoners who have completed their jail-terms is another example how the community is being victim of the Indian system which discriminates against Sikhs on religious grounds”, Stated attorney Gurpatwant Singh Pannun, legal advisor to “Sikhs For Justice”, (SFJ) a human rights group. 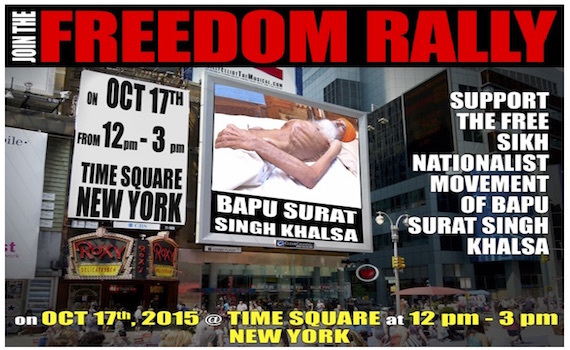 Sikh“To highlight the denial of justice to Sikh political prisoners, a simulation of Indian prisons Sikh will be enacted at Times Square on Oct 17” added attorney Pannun.

Bapu Surat Singh Khalsa is seeking the release of more than 80 Sikh convicts lodged in jails around the country. He insists that many of the prisoners have been kept behind bars despite them completing their jail terms. The Punjab police however insist that no Sikh is behind bars without justification and that those still jailed are serving life terms.