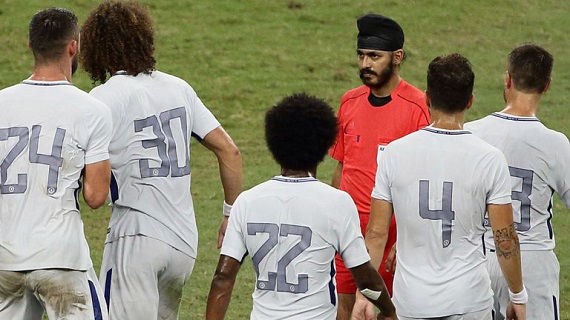 Sukhbir Singh during the match.

It was during the International Champions Cup (ICC) match here on Saturday that he was officiating in which he mistakenly made some controversial decisions, the match was between Inter Milan and Chelsea in which former won with 2-1.

Following this match some netizens took to Twitter to criticise Singh’s decisions and commented on his ethnicity.

“I wouldn’t say I’m affected by it because I haven’t read the tweets, but that doesn’t mean I condone racism. It’s (racism in football) something that definitely needs to be looked into. There should not be any bias towards anyone’s race,” Sukhbir Singh was quoted saying by The Strait Times.

The anti-discrimination bureau ‘Kick It Out’ is investigating the incident, a move praised by Sukhbir Singh, notes The Tribune (TT).