I learnt a huge amount in the company of a great Sangat… It’s true when they say there’s nothing else like it [Sidak]. Your programming represents to me how Sikhi should be taught, and more than that how it should be felt…I feel truly privileged to call myself a Sidaker.

Thirty-one such inspirational stories left Sidak this year to their respective homes to ignite the Sikhi spirit anew in their locales. Sikh Research Institute (SikhRI) concluded its thirteenth annual summer program, Sidak, on 31 July 2015, at the Khalsa Center in Miracle Valley, BC, Canada. The program was attended by 31 participants from all over the United States, Canada, and the United Kingdom.

As always, Sidakers left with deep impressions of Sidak’s transforming experience. Gurpreet Kaur from London, UK stated, “Over the course of 2 weeks, you’re immersed in an environment where the learning is exponential. The journey is absorbing… Through learning about its rich origins and history at Sidak, you begin to see sides and stories of Sikhi that you rarely hear or see in other forums. And crucially, you’re given the tools and frameworks to come to your own conclusions…  I’ve come away with a renewed energy; inspired to do more and invigorated. I’ve begun to see Sikhi and my relationship with it in a totally different way.  For the first time, I feel like I have a true grounding in what Sikhi is. As much as I’ve learned, I feel like I’ve come away with an insatiable appetite to know and do more. And now I have the foundations, tools and support to do it.”

This year, three separate programs were offered at Sidak: Sikhi 101, Sikhi 201, and Gurbani 101. All three tracks explored Sikhi through: lectures, presentations, workshops, and group discussions. Sikhi 101 participants studied an overview of Sikh history and theology through structured learning, while Sikhi 201 students delved deeper into the same subjects thru rigorous reading and discussion. The newly instituted Gurmukhi 101 focused on symbolisms, cultural and folk elements, interpretation schools, art of translation and major themes/principles appearing in the Guru Granth Sahib. A Sikh Ambassador and Leadership Training (SALT) was also taught, with an objective to allow Sidakers to connect their Sidak learnings with their personal Sikh practice and tie into their role as Sikh ambassadors and community leaders. Not only that, Sidakers also engaged in challenges requiring them to make videos about different issues under SikhRI’s new project Sikhia, which saw some interesting and heartwarming results. 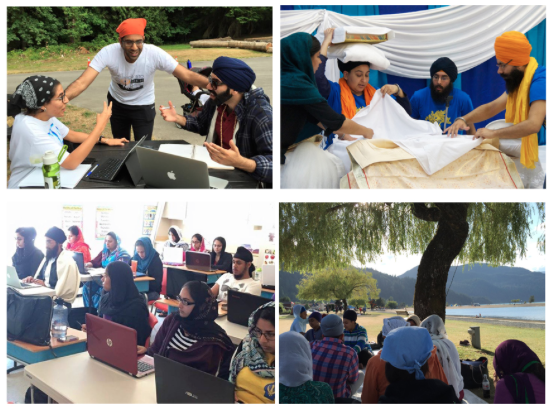 “At Sidak 2015, we introduced new Gurbani 101 course, enlarged pool of facilitators, and brought in external consultant to do program evaluation. We are now planning to take Sidak to new heights: vision is to avail this 2-week Gurmat based thought leadership to any Sikh aged 18-20 worldwide. We are focused on educational experience that adds knowledge, enhances skills, and evokes behavior change,” remarked Harinder Singh, SikhRI’s CEO.

The usual day started with morning divans, which consisted of Asa ki Var. Interpretation of Sabads at a personal level, ardas, and collective reflection on the hukam of the day were a daily routine. Every participant was required to sing a Sabad, learn how to make Degh and were all encouraged to do Ardas and take Hukam.

“The way the darbar was set up at Sidak was really cool. At other camps that I’ve been to, darbars were way different, we would just do straight nitmem and many people would fall asleep or zone out. Sangat would hardly participate in the reading of path and kirtan. Whereas during Sidak, it was the opposite and the feeling that I got when I was in darbar was just unexplainable. Never have I ever felt closer to god than during those two weeks,” noted Kirun Hundal, a participant from, Kansas, US.

“Sidak 2015 has given me a well-rounded understanding of Sikhi while being amongst amazing sangat who are on the same quest. It’s an intellectual and spiritual experience as you not only gain knowledge but also begin to transform from the inside as Sikh values begin to inherit you. Sikhi is studied on a critical perspective at Sidak. The quality of learning acquired through lectures, discussions, interactions, and darbar time not only made the path to Sikhi clear but also inspired me to make the necessary efforts to make Sikhi a part of my daily life,” said Salveen Kaur Dhadda, from Surrey, Canada.