Nakodhar: It was on  Feb 4 1986, four youths associated with Sikh Students Federation who along with hundreds of other Sikhs were protesting against the sacrilege incident of Guru Granth Sahib, fell to the bullets of police at Nakodar. Today their 31st death anniversary was observed by their family members at village Litran, native village of one of the martyr Ravinder Singh. Other three were Baldhir Singh, Harminder Singh and Charmal Singh.

Ironically, the dead bodies of four were not handed over to family members for last rites and police cremated the bodies as unclaimed ones. Unfortunately, at that time Izhar Alam was SSP Jalandhar who is today senior functionary of  Badal Dal. 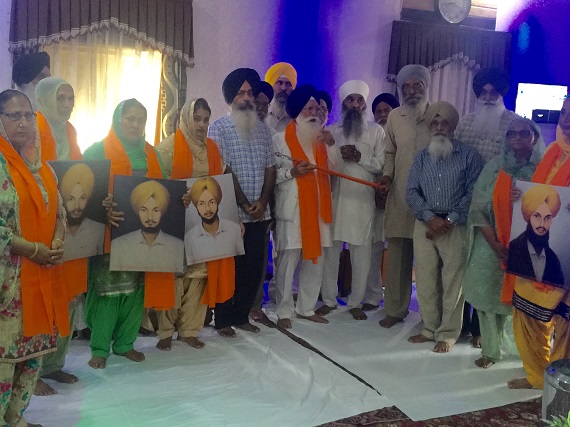 SGPC president Prof Kirpal Singh Bhadungar & Dal Khalsa chief H S Cheema along with party spokesman Kanwar Pal Singh were also present at the event and paid there tributes to all the four and termed them as martyrs of faith.

Fulfilling the desire of family members and sangat, the SGPC head announced to install the portraits of all the four at Sikh Central Museum at earliest . He eulogized their sacrifice for religion.

Dal Khalsa leader while appreciating the SGPC for this gesture appealed to Prof Bhadungar to restore Nanakshahi calendar in its original form. He reminded the gathering that in 2003 SGPC under Bhadungar  adopted the calendar but after seven years in 2010 his predecessor killed the letter and spirit of the calendar and reverted back to Bikrami. H S Cheema requested Bhadungar to restore the pristine glory of original calendar to which The President responded affirmative. SGPC head assured that if Sangat will support him,  he would definitely  try his best to re-adopt the original one. SYP head Paramjit Singh Tanda was also present. As a mark of respect they all presented Siropa and portraits of all four martyr to their family members.