Baba Ranjit Singh Khalsa went into some depth to discuss the facts and truths surrounding the just campaign by an elderly man fighting for righteousness. A large turnout meant a big overflow of Sangat outside the Darbar Sahib but the strong show of support by the Sangat is a clear signal that the campaign for this cause has immense support from the Sikh nation.

Discussed in a very frank and clear-cut manner were the evident historic failures by others, the handling of the matter by the authorities, as well as the way forward for Sikhs. 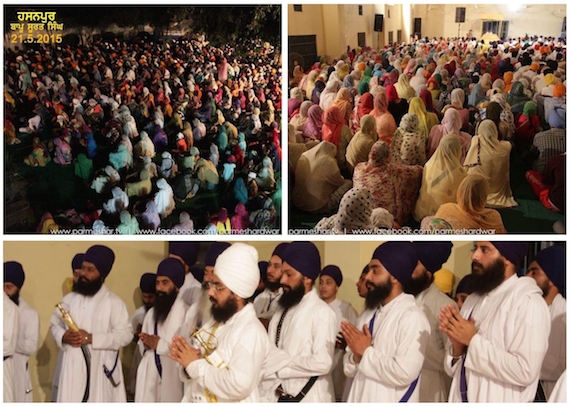 Images of Diwan at village Hassanpur on May 21.

Similar support Diwaans were also done for Gurbaksh Singh Khalsa during his hunger strike, but it was unfortunate that many hearts were broken and many feel the support of the nation was taken advantage of. If one is now off the scene, the statements of support by Sikh Parcharaks forever remain in the public domain. However, Bapu Surat Singh has continued this campaign not just for the cause, but also to wash away the very stains of these historic failures and to bring back the serious respect of a Sikhs unwavering commitment by Ardas to his Guru. Those who have spoken to Bapu Surat Singh all feel this truth is on his conscience and the nation is hopeful Guru Maharaj will shower their blessings that Bapu Ji’s campaign concludes with fruitful results.

Baba Ranjit Singh Khalsa gave answers to those who raise various questions and gave full commitment they will fulfil their duty as a Parcharak in accordance to the requests of the managing committee for the campaign.

A strong message was given to those in power, leaders and the ones who consider themselves as ‘Panthic’. There is no doubt that the Sangat puts the leaders on thrones of authority and if the Sangat should awake, then they also have the power to take away the thrones. The disappointing events shown across Sikh media of Police chasing Sikh men and women on 20 May 2015 were discussed. Any person who is loyal to Guru Sahib will not have the moral fibre to touch the ‘Dastars and Gatreh’ of Sikh men and women.

Baba Ranjit Singh Khalsa quoted Gurbani to explain that those calling themselves leaders in Punjab, those with red lights on top of their cars and travelling with bodyguards, these people are not necessarily leaders at peace. Often even those locked behind physical prison bars are the ones at peace as their conscience is clear and mind is at rest. When false people enter the ranks of leadership, they become prisoners of greed. The Sikh Parcharak explained that red lights on top of cars does not make one a leader of the nation, only righteousness does.

The campaign by Bapu Surat Singh continues, Sikhs across the world continue to support the cause.