PTC Punjabi, a TV channel said to be owned by Badals, has claimed that it has “Worldwide rights” over the broadcast of audio of Daily Hukumnama from Darbar Sahib, Amritsar.

PTC Punjabi sent notices to some media outlets, including the Sikh Siyasat, through Facebook and got blocked Daily Hukumnama visual posted by these media outlets on Facebook.

The matter came to notice of the Sikh Siyasat on Friday morning when our team noticed a “Block Content” notification from Facebook. This notice was triggered on Facebook by PTC Punjabi, which claimed that it had Worldwide rights over the audio of Darbar Sahib Hukumnama.

It is notable that the Sikh Siyasat was sharing audio-visual of the Darbar Sahib Hukumnama on daily basis for past few weeks. The source of audio and text of Hukumnama Sahib was the Shiromani Gurdwara Prabhandak Committee (SGPC)’s website where both audio and text is put in public domain by the SGPC on daily basis.

PTC’s claim of exclusive rights over the audio is not justifiable in any manner. In fact no organisation, institution or individual can claim such rights over the Hukumnama Shaib which could restrict others from broadcasting it for the Sikh Sangat. 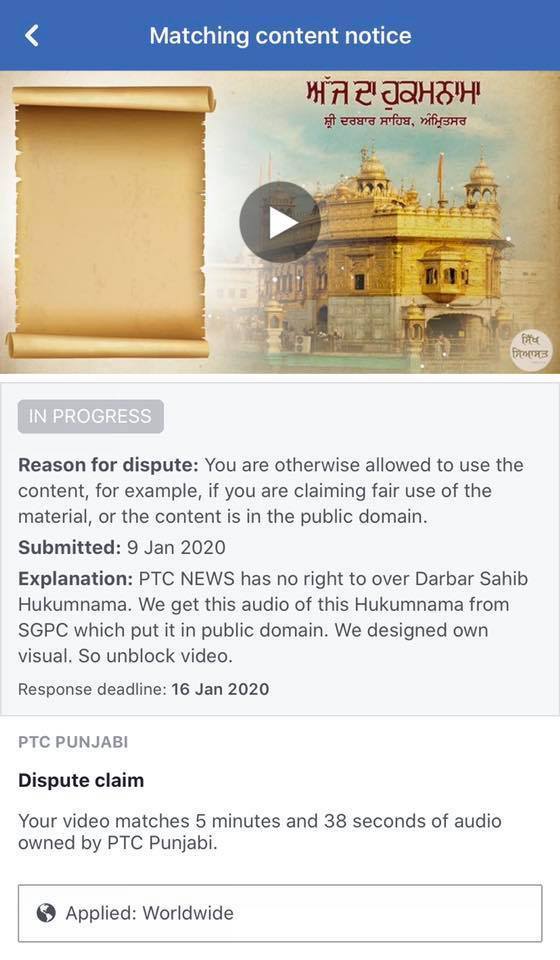 Sikh Siyasat also contacted SGPC chief secretary Dr. Roop Singh on Friday evening through phone to get his response on this issue. Dr. Roop Singh said that he could not comment on the issue without receiving anything in writing. He was reluctant to pass any comment and requested the Sikh Siyasat to communicate in writing along with some proof showing that the PTC Punjabi was trying to block Sikh Siyasat from sharing Audio of Hukumnama Sahib with the Sikh Sangat via Facebook.

Dr. Roop Singh’s response was clearly evasive and he failed to take prompt notice of the matter. But the Sikh Siyasat has decided to send a written communique to the SGPC and Dr. Roop Singh. Communique will be sent on Saturday.

Sikh Siyasat has also talked to the representatives of various Sikh organisations,  Sikh intellectuals, social, religious and political figures to know their viewpoint on this issue. Videos of these talks will also be shared on Sikh Siyasat soon.

We shall keep readers posted about future developments on this issue.