US Sikh Soldiers Commemorate Vaisakhi at the Pentagon

Washington D.C.: For the third consecutive year, the Office of the Pentagon Chaplain commemorated Vaisakhi with members of the military and the Sikh community on Friday (April 29).

“The recognition of the Sikh faith inside the Pentagon for the third straight year speaks volumes about the importance that the military places on celebrating both faith and diversity,” said Major Kamaljeet Singh Kalsi. “We hope that this celebration of religious diversity continues with more observant Sikh soldiers serving in the U.S. Armed Forces.” Major Kalsi, who was the first Sikh in a generation to receive a religious accommodation to serve with his articles of faith, was the lead organizer behind the event.”

The ceremony included remarks by the Office of the Pentagon Chaplain and Major Kalsi and featured speeches by Naval Petty Officer Geena Kaur and Pardeep Singh. Singh spoke about the historical meaning and significance of Vaisakhi, while Kaur spoke about seva and what Vaisakhi means to her as a soldier. Hannah (Kramer) Harleen performed the national anthem and Raginder Singh Momi, Gagandeep Singh and Jashon Preet Singh delivered musical performances. Captain Simratpal Singh, the first observant Sikh to receive a religious accommodation while serving on active duty, recited Ardaas (Sikh prayer). 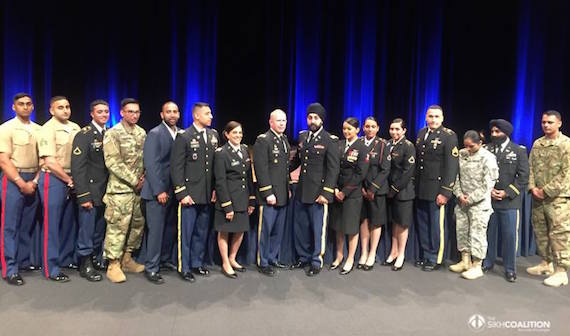 This celebration at the Pentagon comes right after Captain Singh and three additional observant Sikhs successfully obtained long-term religious accommodations to serve in the U.S. Army.

These four cases mark historic, landmark victories in our work to end religious discrimination by our nation’s largest employer, the U.S. Department of Defense. However, tremendous work lies ahead to end the presumptive ban on Sikhs in the U.S. military.

“We are so grateful to the Office of the Pentagon Chaplain and Major Kalsi for making this event happen for the third consecutive year,” said the Sikh Coalition’s Executive Director, Sapreet Kaur. “Without their tireless efforts and leadership, this Vaisakhi commemoration would not have been possible.”