Toronto: To share and promote the values of Sikhi on campus, the Sikh Students Association organized Sikh Awareness Week, which took place from March 14 to 17. Students and professors from different ethnicities and religious backgrounds participated in the events throughout the week.

The week began with Bedtime Sakhis hosted by Tejnoor Kaur from the York Federation of Students. The magical evening consisted of Kaur taking the students back to 1469 by recounting the sakhi (story) of the first guru of the sikhs, Guru Nanak Dev ji, while cookies and hot chocolate kept participants warm.

Next was the prayer night. Approximately 20 students gathered in the Student Centre to collectively recite Sri Rehraas Sahib, the evening Sikh prayer, followed by kirtan where everyone sang hymns accompanied by a harmonium and tabla. 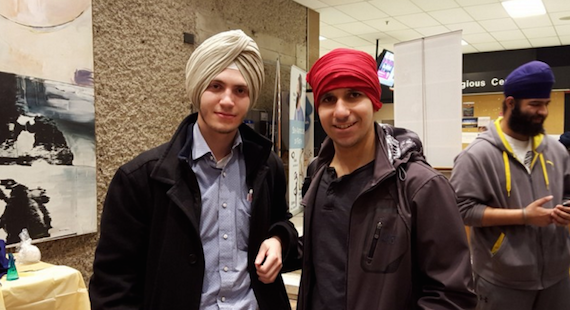 The annual Dastaar Day, one of SSA’s most popular events, took place on March 16 in the East Bear Pit in Central Square. Over 200 students and staff had turbans tied and learned its significance in Sikhi. Sikhs wear turbans as a symbol of royalty, to take care of their unshorn hair, promote equality, and preserve the Sikh identity.

“We received a really nice response from students here at York University,” says Sukhman Singh, co-president of SSA. “It was very humbling and inspiring to see people wanting to learn about something new.” Various members of SSA helped make the event a success and ensured all participants had the opportunity to take part.

“I look forward to this event all year,” says Balpreet Gill, a first-year kinesiology student.

“Although I don’t wear a turban regularly, I make sure to get one tied as it makes me feel connected to my roots.”

The week concluded with The Amazing Race: York Edition, an event executed for the first time by SSA. A race with several checkpoints and short Sikhi-related challenges took place at different locations on campus such as the Student Centre, Bethune College, and the Health, Nursing and Environmental Studies building.

Teams of two people were in a race against the clock in search of the locations on the York map, which was turned into the map of Punjab. Each challenge was unique as the location that was associated with it represented a historical event, which had taken place in Sikhi.

Activities at stations included chapatti-making competitions to understand the concept of selfless service and langar in Sikhi. Langar is a community kitchen in every Gurdwara (Sikh place of worship) where visitors are served free food regardless of their background, religion, colour, or caste.

Everyone sits on the floor together to enjoy a free meal, which represents equality. There were eight stations in total and the pair with the fastest time was rewarded a tablet each.

“We were really happy with the turnout of the event especially that so many non-Sikhs participated,” says Simreet Kaur, executive member of SSA and key organizer.

If this sounds like a good time, look out for the celebration of Holla Mohalla, a Sikh festival held at the Scott Religious Centre on March 31 at 5:30 p.m.