Amritsar: As per the media reports available the members of Sikh Youth Federation Bhindranwala here today organised an  Ardas samagam in the memory of 13 Sikhs who were killed by so-called Nirankaris at Amritsar on the Vaisakhi day in 1978, while protesting against ongoing Beadabi of Shri Guru Granth Sahib, The massacre is remembered by the Sikhs as “Saka 1978”. 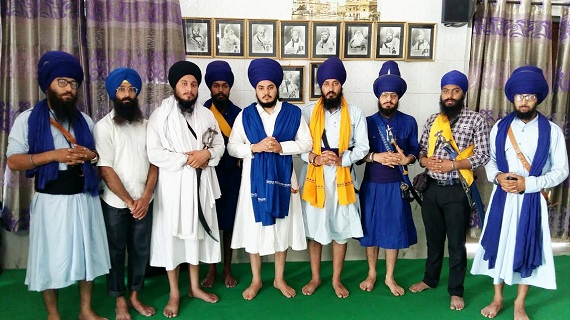 Bhai Ranjit Singh Of Sikh Youth Fedration Bhindrawala with Fellow Singhs while performing ardas for the Martyrs Of Saka 1978.

Sikh Youth Federation Bhindranwala Senior Vice President and Damdami Taksal student Bhai Ranjit Singh reportedly performed the ardas at Gurdwara Angitha Sahib, which stands as memorial for the Saka 1978 martyrs. It is notable here that these 13 Sikhs were massacred by Nirankaris while they were protesting against anti-Sikh activities of the then Nirankari chief Gurbachan. Saka 1978 was a turning point in recent Sikh history as the denial of justice to the Sikhs in this case had crystallized the political subjugation of the Sikhs in India.