Washington, DC: This summer, United Sikhs attorneys and advocates met with 15 offices of Senators and Congressmen during the Youth Summit on Capitol Hill in Washington, DC to address the most pressing issues currently faced by the Sikh community. Once again, community members from around the United States were given the opportunity to meet these officials as well.

Meetings were held with the offices of Congresspersons and Senators from California, New York, Virginia, Washington, Alaska, Nevada, Illinois, New Hampshire, and Kansas. Many of these meetings were with Representatives and Senators from districts and states with small Sikh populations, as opposed to those more commonly populated by Sikhs. Consequently, Representatives and Senators who were unaware of the struggles faced by Sikhs in America were educated on the tenets of the Sikh faith, its respectable values, and the post-9/11 backlash. 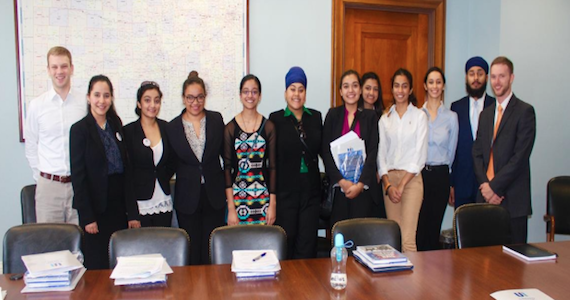 Advocates in the office of Senator Moran

Our concerns were met with understanding and agreement on the issues presented. Congresspersons were moved by the struggles faced the American Sikh community, and promised to assist United Sikhs including a religious accommodation amendment in bill H.R. 1467, the Drug Free Commercial Driver Act, as a means of protecting commercial drivers of the Sikh faith. Others pledged to help us in our effort to include a category for Sikhs in the United States census.

United Sikhs continues to hold our government accountable for the commitments they have made to protect religious freedom, and work towards seeing freedom of religion ensured for all American citizens.