#SikhGenocide84 Remembrance March and Freedom Rally in London on June 7

London, UK: Sikh Organizations of UK, under the banner of Federation of Sikh Organizations (UK), will be holding Ghallughara Remembrance March and Freedom Rally in London on Sunday June 07, 2015 to commemorate anniversary of June 1984 Indian Army attack on Darbar Sahib. The Army attack of June 1984 marks the begging of “third Ghallughara” (third holocaust) of Sikh history. 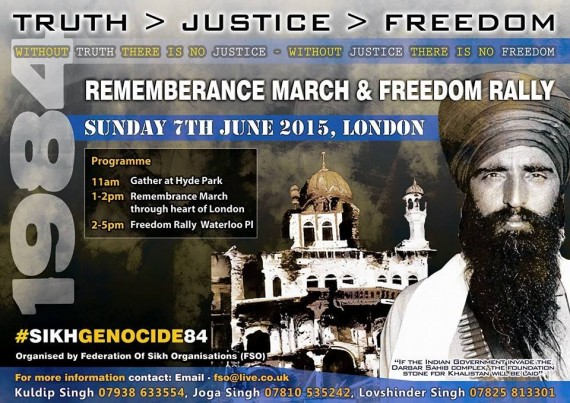 Remembrance March and Freedom Rally by FSO on June 7

FSO representatives Kuldip Singh and Loveshinder Singh Dallewal told Sikh Siyasat News (SSN) that the Sikh sangat will gather at Hyde Park at 11 am where Panthic leaders will address the gathering.

The remembrance march will start from Hyde Park at 1 pm. It will pass through heart of of London before concluding at Waterloo Palace.

A freedom rally will be held at Waterloo Palace from 2pm to 5 pm.