Arizona, USA: This week, Arizona became the eighth state to approve history and social science standards that will include Sikhism and other world religions.

This means that Sikh children across Arizona will now enter classrooms where Sikhi is taught by teachers to classmates. Within ten years, at least one million Arizona students will learn about the Sikh community in sixth grade and again in high school. With this win, Arizona just became a more inclusive and tolerant place for our children to grow up in. 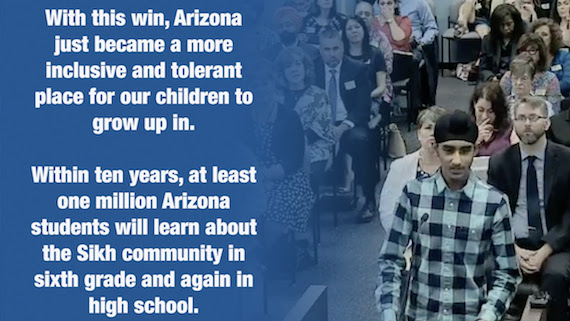 The Sikh Coalition said in a community update that for past 18 months it worked with Arizona Sikh community members to proactively engage the Arizona Board of Education through every step of the curriculum review process. “In September 2018, after the Board of Education announced a shocking new proposal that could have eliminated Sikhism completely, we dedicated hundreds of hours to apply pressure through every conceivable avenue to make sure that would not happen”, reads a release by the Sikh Coalition.

“Arizona now joins California, Texas, New York, New Jersey, Idaho, Tennessee and Colorado in passing curriculum standards that include Sikhism. These combined changes have the potential to reach up to 15 million public school students and that number continues to grow”, the release reads further.

“While this is significant progress, we cannot rest until every child in America has the same opportunity. We cannot rest until we have accurate content in the hands of educators across the country. Our team has led this multi-year initiative and our staff has the vision, expertise and proven track record to get this done across the rest of the country”, said teh Sikh Coalition.